I am going to have a last go at trying to improve the settings on the Sachs, before I finally decide to get rid. Its done approaching 10k, so it might be past it anyway.

OK, I admit this is a last desperate bid to save money. My cheapskate tendedncies are not easily overcome. Does anyone have the factory setting for the shock? I think I need to start from what the handbook calls the "optimum" original set up.

Before you say it Bef... I know I should buy a Technoflex.

Responses to this post seem to have disappeared, as has my post on the RSV board. WTF?

I have been told that the linkages on the 2001 RSV were changed from those on earlier models. Does anybody know whether a pre 2001 unit is easier of more difficult to fit to the Falco? My bike is a 2001, but I don't think there have been any changes to the Falco suspension setup.

The Falco linkage are identical to the early RSV (-2000). The RSV-R and newer RSV, are different to Falco, (I don�t know if these too are the same).

Take a look at this picture (Thanks Cplus -Follow link!) it gives a pretty good idea: 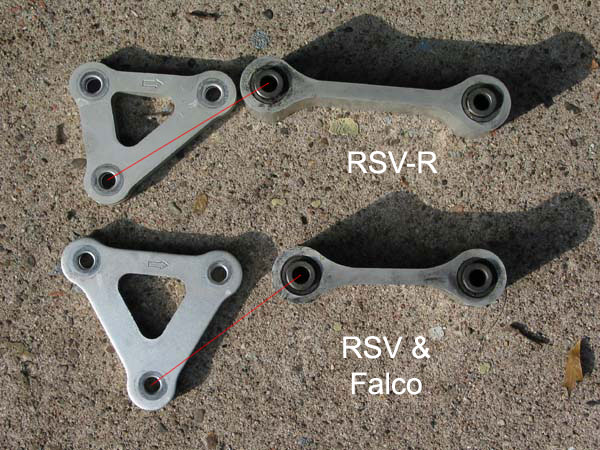 Cheers mate. Question answered. I have an offer of a Mille shock, covered 2000 miles which I may take up.

Islefalco,
What model year are the RSV shock from?
It should be the 1997-2000 to fit. If it's newer you need to respring it or change linkage...
Congrats and Good luck!

Tokas,
1999, so it should be OK, apart from making a bit of room for the valve - I think I read that some time back on Daz's site.

Be careful if you decide so file or grind down the schrader (sp?) valve. If the compressed gas -- nitrogen, I think -- leaks out you'll need to send the shock out for recharging. The other option it to 'relieve' the subframe somehow (i.e. get a big hammer), which never sounded all that good to me.

Good luck! If it turns out well, and you want to share the process or results, I'd be glad to post a writeup w/ or w/o pictures on my Falco site.

I will not be making any alteration to the subframe! I think the valve just needs a small amount ground off it. I need to check that out, but that is the route I will take, carefully.

When I have it done, I will send a photo.