Having acquired a GSXR600 side stand I have a little more info re this potential mod.
After fitting an Ohlins rear shock the ride height increased about 10mm, making parking on the side stand a decidedly iffy experience necessitating the carrying of a 3 inch square10mm wood plate. As you can see from the pics the GSXR stand improves the stability to that which you would expect of a quality bike, the stand is actually �engineered� with welded support plates and some great looking curves. The first pic shows a comparison between the OEM and the GSXR stands.
However if anyone thought that this was going to be a straight bolt on mod then think again. The first problem is going to get it bolted to the Falco mounting plate, whilst they both use a 10mm bolt the shoulders are of different diameters and they fix from opposite sides. This is relatively easy to overcome by either turning the shoulder of the mounting bolt down to suit the Falco mounting plate or by enlarging the mounting plate hole to suit the bolt. The next problem is the side stand switch. This is fixed as standard by an 8mm(?) bolt that screws into a threaded hole in the head of the OEM mounting bolt. As the GSXR stand is bolted through from the opposite side it would require an 8mm hole to be drilled and tapped in the end of it, which I don�t think is feasible. Of course the switch could be disconnected altogether but I�m one of those that finds this safety device very useful. Another approach could be to mount a plunger type switch (probably a hell of a lot better than the standard switch) and rewire it. Once you�ve dealt with all the above all you need to do is to is reposition the spring hanger and the kickdown bar. As far as ground clearance is concerned I would say that the GSXR stand would be little worse than the OEM one but this is a subjective opinion as its rather difficult to say just by looking at it. 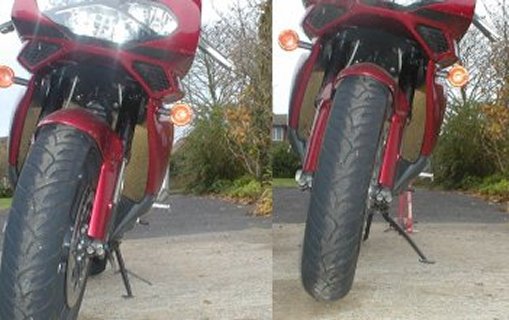 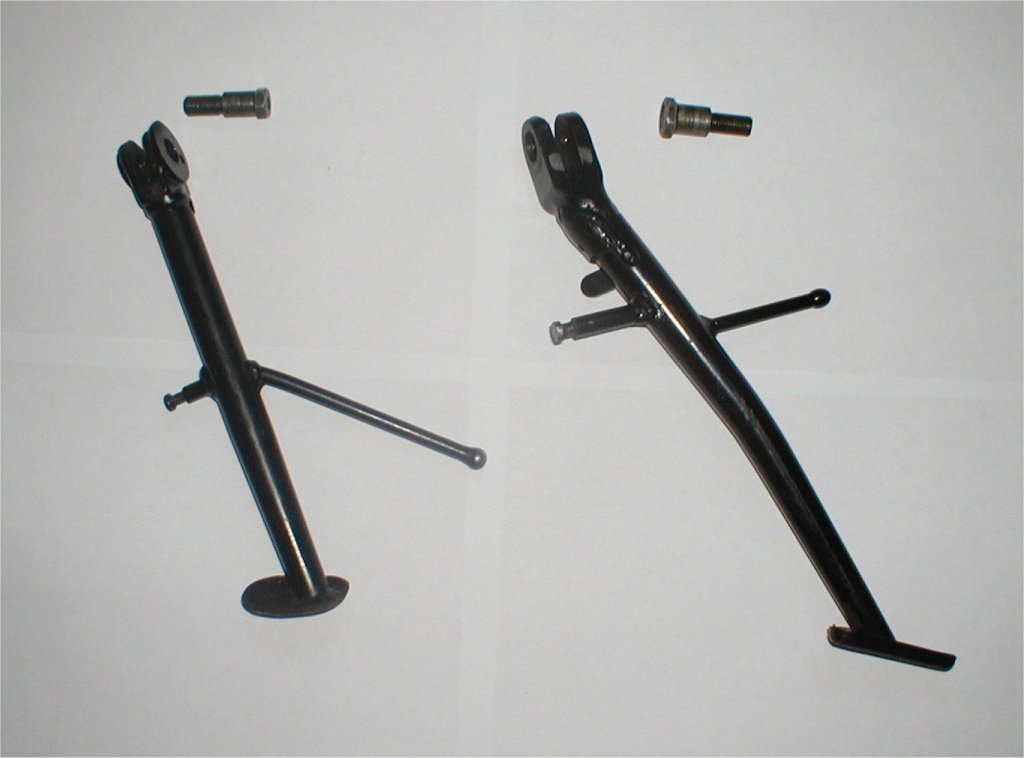 Red, looks like you've got the bike propped up in the 2nd photo with the foot of the stand 2 or 3 inches off the ground, is that correct and if so, is it stable when on the stand? Looks like it may not be worth the trouble?

I can confirm that both pics are of the bike being supported by the side stand - NO props.

My appologies, the red thingy behind the suzi stand had me wondering - no offence intended!

From what model year is the gixer stand? Does it matter?

That 'red thingy' is my track stand. I have to confess to not knowing for sure the model and year that the GSXR stand came from but I will try and confirm these details, but I think it was a Y2k GSXR600. The picture shows the difference between the stands when they are in the up position. Its actually quite hard to get a perspective on the relevant positions from the pic but the end of the GSXR stand is further to the rear, higher and further outboard than the original. In the down position the GSXR stand is 95mm further outboard than the original and if you take account of the fact that the contact point for the ground on the original is at the inboard end of the plate then the difference becomes nearer 125mm. Practically this means that it is now a struggle to lift the rear wheel off the ground by tipping against the side stand, a measure of the improved stability. 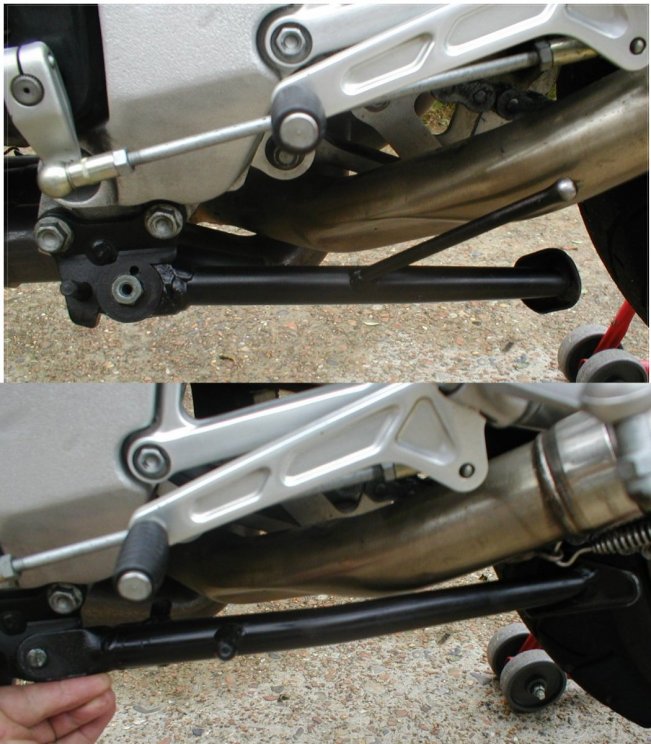 I agree with all your comments and found I had to undertake a few mods. I reused the falco pivot bolt by drilling the suzuki arm out to 12mm. I also had to weld in a 1/4 bar to reduce the depth of the "throat". The suzuki springs work well on the falco, no need to reposition the spring arm. I also bushed out the suzuki arm to accept the falco bolt.

Without the 1/4 bar the stand goes too far forward, and when up, collides nicely with the exhausts. I also used a 3mm bump washer to reduce the gap between the plates, otherwise the pivot bolt has to take the load, not good.

Overall good mod thanks for the tip

Hi John, thanks for the input. Unfortunately I didn't get the suzuki springs with the stand, but I reckon I'll weld up the rear bushing and then redrill and tap so I can use the Falco bolt as you said. That way I can still use the OEM stand switch with the addition of a small hole to take the swithch lug (or pin as it now is on mine). How do find the issue of ground clearance? Fo now I have welded a 3mm thick piece of plate to the bottom of the Falco stand which has a 25mm offset from the front of the original. I have to say this has made so much difference that I may just leave it as it is. Your also right about the depth of the suzuki throat.

Thanks for the mail. You are certainly right about welding up the hole in the stand and retapping. I went for a brass bush (easy to tap) but it cannot take the torque required on the securing nut ie 25n. I also decided to remove the bump washer as the bike is too bolt up right. I guess that the slot in the stand is being compressed by the securing bolt pushing the bush in. Otherwise a big improvement on the stock stand. Ground clearance quite good.

I've just gone another route to sort the angle of the bike with the ride height raised. I chopped about an inch out of the stand approximately an inch up from the foot. Then I got a length of 19mm threaded bar welded into the foot section, and a nut welded onto the bottom of the top section. the foot can then be screwed up into the top section and locked off with another nut. Hey presto an adjustable length sidestand.
I know it won't help the stability like the Gixer stand that kicks out more, but it seems to work ok.

One way to make the sidestand wider is to get the USA-version. If I'm correctly informed it extends further out from the bikes center line. Look at the Spare Parts Catalogue:

If you have changed the shock to a longer one, you probably need something else, as sugested above.

Why do we Americans need two sidestands for our bikes when the rest of the world only needs one? Are they like training wheels?

Redlion -- great mod! Any interest in writing up a how-to article? If so, drop me an e-mail or stop by. Thanks!

It's because we in the US are much more litigious, and would sue the pants off of Aprilia if our bikes fell over, requiring expensive repairs for no good reason

Morality, if you can't sue them the mfg will give a crappy stand???

I guess I was being too obtuse. The parts list above shows the quantity '2' for the sidestand for the US bikes, but only one for the rest of the world. Obviously, we don't need two sidestands on a bike. Sorry.

I guess Aprilia thinks the janks have some seriuos balance problems...

Aprilia obviously thinks this is a "Central Stand"!!!

That makes me wondering how unstable the bike would be on what Aprilia would call "Side Stand"???

A closer inspection of the parts list suggests that there is more to the conversion than just changing the stand plate (part 10) as I first envisaged. Parts 8, 11 and 13 (the bolt, stand and nut respectively) all have a different part Nos. for the USA. Does anyone know if there is a difference in the parts, especially the stand. It may be that due to the different plate it could be a different length or shape

FYI the US spec stand is not fantastic either but adequate, on par with most other bikes.
I can't figure out Aprilia's marketing on this:
"Overcharge the Yanks and give them a decent stand, the Limeys are cheap bastids they get the crappy stands!"