Mine isn't nicely polished, and I haven't gone for a shakedown run yet so I can't rave about the Ohlins or how big a difference the 16/43 Sprocket Specialists sprockets and DID chain make, but I do have pictures! 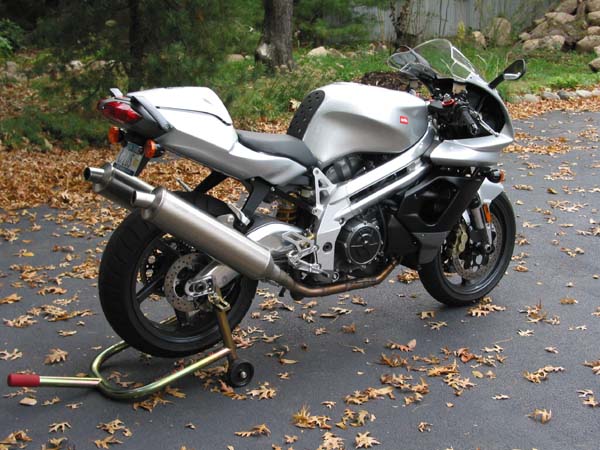 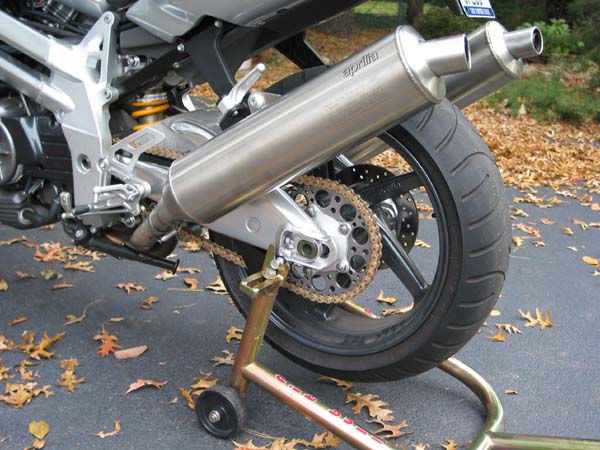 Now why the Fk didnt they do this in the 1st place!?!

They did the rsv, then they did a half assed attempt at a sports tourer - and put frowns on the faces of their Race Rep fans! Why not just say "We've got a fk off stonkin motor, and your geddin it in a rr and a streetfkr version - sports tourer later ie Foutu watsit and other less pure muts...

btw, what sprocket have you on the back???

Isn't it great guys, that so many of our RSV mates have crashed and decked their RSV's for us to get some great parts off of. Aprilia did a great job in making so many of the important bits transferable to the Falco!

Dave - it's from Sprocket Specialists. One of their titan tough series.

Just a thought but may be the reason for all these broken RSV�s is because of the swingarm�s.

I rekon Falcanos has somthing, some of you guys can't make up your minds which bike they want, so why not ride both at the same time

Oooh, I want one too!

Okay, yesterday we had snow flurries so I didn't get to out for a shakedown run. Today was cool (45f) but clear so I wanted to get out and see how everything worked. Below are my impressions after a 45 minute ride.

But first, I should mention that I have no idea what spring rate this shock has. Whatever comes stock with a 2001 RSV-R, I guess. I've e-mailed PPS and Ohlins USA, but I haven't heard from either in over a week so I'm not holding my breath. I did call Aprilia USA and they confirmed that there was a change to the Milles between 2000 and 2001, but they couldn't tell what the changes were or even what the changes were meant to accomplish. The person I spoke with knew that the shock should be fine for someone between 165 and 195lbs, but not much more. Aparently Aprilia Italy isn't too forthcoming with information.

Back to the show. Right away, it seemed like the back end was a little higher. I didn't measure the ride height before switching everything, but the shock was only about 2mm longer (~321mm for the Ohlins vs ~319 for the Sucks) so it shouldn't have been a big change. This isn't a big deal for me as I have a 32" inseam, but it could present a problem for shorter riders. Kinda like a Mille.

It took a few good twisty roads to appreciate how much better the Ohlins works than the stocker. Okay, the roads weren't all that good -- they were pretty crappy in fact -- but that's where the difference showed up most. With the bike cranked over through pot-holed bends the back stayed composed. I was pushing hard enough to get a few little wiggles through the bars going over the bumps, but the back just stayed planted. Very nice. I didn't push much harder because it was still only about 45f and there were wet leaves on the roads.

'Composed' really does seem to be the best way to describe the new shock. No matter what I threw at it, the rear never got out of shape. More hard riding is the only way to make sure that it's all good, but initial results are promising. Oh, yeah, all this on the stock settings.

The other change was going to a 43t rear sprocket. This really goes a long way towards fixing on the of the few issues I had with the Falco. It was just geared too tall for my tastes. With the 43t rear sprocket, the first four gears are more suited to how I ride in the twisties and 5th and 6th gear are more usable for highway droaning.

A few folks have expressed concern that 16/43 gearing would turn the Falco into a wheelie monster. I guess this all depends on how you ride. Never having been a horn mono maniac myself, I'd say that it's no worse than before. Sure, the front will come up without much effort, but it will also stay on deck if that's what you want.

Okay, now scroll back up to the top of this thread and take a look at the bottom picture. Look closely at the rear axel and chain adjuster. When I switched to the 43t rear, I installed a new chain with one link more than stock. This means that the chain adjuster is closer to it's minimum adjustment range and the wheelbase is a little shorter. If I cut the chain at two links over stock, the adjuster was too close to the maximum end of it's range for my taste. Probably no big deal either way, just thought I'd point it out.

So, was it worth the unmentionable cost and 8+ hours labor? Absolutely.

Puting a 15 on the front == 44 on the back and takes the same chain length. Totally agree that lifting the front is a personal matter!

So what's next? I'd suggest the Rene Air kit, which goes pretty well with a pair of cans of some sort

This area here is sponsored by "R Whites" (old british lemonade tv ad joke), its a secret RSV fan club. Just take a look at the poor fellows. It takes a man to admit he is wrong but your admittion means you are 50% cured of Falconitus which induces hallucinations and gives delusions of superior bikeness !! Dave. If you get the swingarm you will have an RSVR pretty much eh ?

You can then take the restrictions off your engine to gain the horses they took off and Roberts your fathers brother !

its Brian, Roberts my father-in-law

Anyway, I think I'll keep my bike exclusive and stay with the Falco straight swinger (ooer).

Any of you boys weighed both swingarms to see if theres much difference?

Mr_V, no, no, no... you're missing the point! I don't want an Mille, I want a bike that's better than an Mille. Hence the Falco. The only thing I liked better about the RSV was the swingarm, so now I have the best of both worlds!

Next year I'll get the FactoryPro chip, Akrapovic cans (flame me now) and airbox to be named later. Then I'll say hi to Bob and call myself a happy man.

CRMC33 - I was going to weigh them when I had them both out, but forgot.

I was very surprised at how light the RSV unit actually is. I'd say it's only a pound or so heavier.

Kevin, any chance of that email you prommised me?

so have any of you boys got standard falco swingarms for sale?

Also what did the insurance company say when you told em you'd changed the swing arm.... you did tell them right???

If you haven't I wouldn't suggest having any accidents....

I will have Falco s-arm for sale in about 14days.

Well the insurance peeps don't know about my Renegade cans so I am up sh_it creek too then.

Mille swingarms, Mille shocks, Mille wheels, keep denying it boys, you are being fools unto yourselves !

But still Falco comfort and versatility

So how much do you guys pay on average for a used swinger? Very tempting. Looks the poodle's noodle.

The Powermaster is having a field day with this Mille stuff, you guys!

Meanwhile, see anything Mille in this picture, Mr_Venjer? 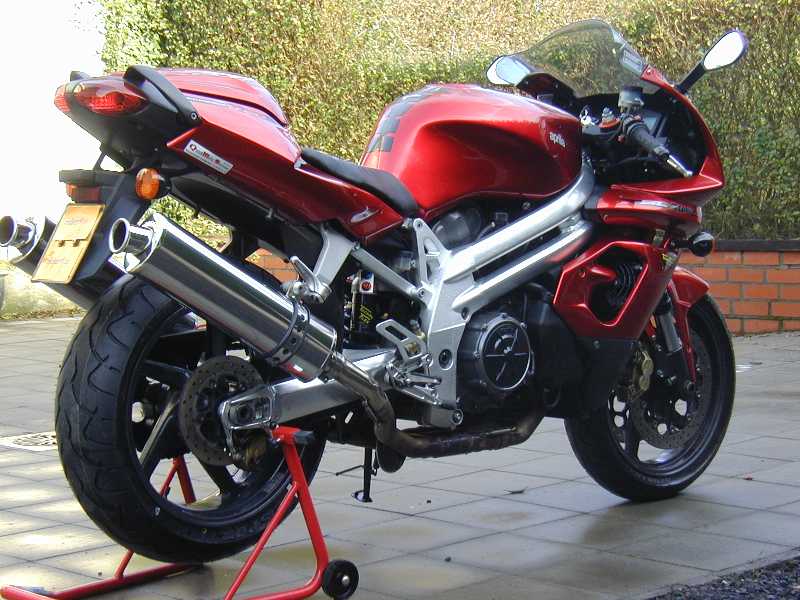 no, the engine is 'retuned' using invisible italian magicary, the forks are lighter and brakes have built in ABS (felt to many as warped rotors) and the dashboard is totally different apart from looking and working the same.
Check it out for yourself, heres my Mille (only used in fair weather).... 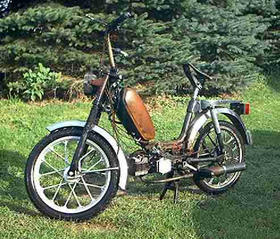 I agree that the body work looks similar tho

hmm, nice wheels but that bike looks suspiciously like the moped I rode back in '63 (and it was old *then*!).

I suppose it was bit unfair of me really as this is the racing model with the OZ forged (or should that be forgery?) wheels

I think crmc33 has found me the solution to my biking troubles!! No longer will I be known as the Dazzer!!

Crmc33 - I love you, but judging by that seat my buttocks may not!!!

that seat would look bril

I especially like the lightweight front brakes! No wonder the Mille wheelies in any gear!

IS that the standard exhaust pipe tho? Looks suspiciously like an Akroprobitch

I have to agree with Falconas

Next year I'll get the FactoryPro chip, Akrapovic cans (flame me now) and airbox to be named later

Been reading too much internet CPlus

The Powermaster is having a field day with this Mille stuff, you guys!

You mean with this Mille Guy? 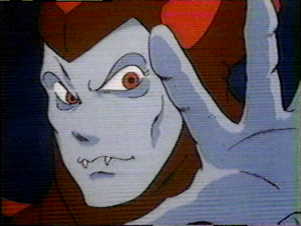 Been reading too much internet CPlus

Sad but true. At least I'm staying away from the print reviews, or I'd be running for the hills!