I have only recently discovered this site and have already spent loads modifying the bike. This was before I'd even heard of Renegade kit !

Anyone know what a reasonable expectation of power drop from crank to wheel should be ?

Chain and sprox are standard right now, but I'll shortly be changing for a 15 tooth front sprocket to save on front tyre wear

Btw, Kevin, since you're new: we've learned to not get excited about anyone stating peak power figures. What's important isn't how much power your bike is putting out, but how the engine performs until you reach that peak. Or do you ride at 9,5k rpm all the time?

My Falco was putting 122 bhp crank on the dyno without any mods at all!!
I'll post the dyno if you need proof.

Sorry if I broke the protocol. I'll try not to let it happen again

In my defence I was trying to highlight the fact that the power drop seemed to be increasing disproportionately with the gains being achieved.

No worries, Kev, there is no protocol here. If there were they would have kicked my arse off this board a long time ago.

Why don't you post your dyno's so we can have a look?

Wheel hp depends a lot on how the chain is, tyre pressures etc., but I'm assuming you already know this.
Crank hp is what the manufacturers work with so IMO that's what we should use to compare.

Meanwhile, here's a dyno of my bike. We were trying out some Eproms at the time. Bike was bone stock, so with OE cans and OE airbox. And OE filter and OE..., well you catch my drift. 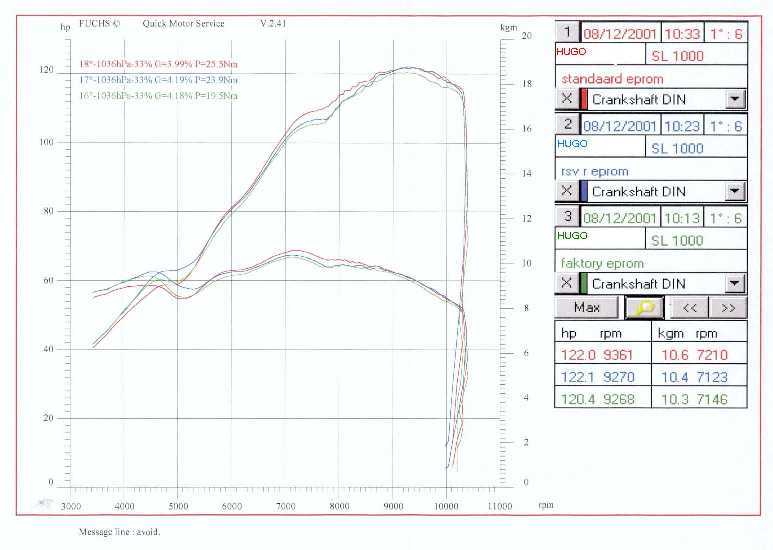 The manufacturers are free to bench-test their engines without gear boxes, alternators or anything else that will cause a drag.
They can also measure at certain rpms and calculate from that what the theoretical power "would be" elswhere in the power band.
- I'm not sure about bikes but car makers always use those methodes and the "rules" are the same for the whole industry.

Since we're not going to take our engines apart for a Dyno we only measure at the rear wheel (tranny, chain, wheel and all yes) and from that you "adjust" (another way to say guess).
I say *forget that nonsense and the mfgs inflated claims along with it*.

Let's measure at the rear wheel before and after and that's that. If the drive chain is knackered advise to replace first or make a note of it.
(and yes I know there are different dyno methods and even different power standards and that's confusing enough!)
Let the flame war beguin!!

I'm not sure about bikes...

Cute!
Do you know for example how Honda gets their hp numbers?

I have no idea how Honda gets their hp numbers. Couldn't care less really.

But according to my latest info, Aprilia have 27 Fuchs dyno's at their factory. And they all need a bike with a working chassis to measure the power. Or don't they?

You say 'let's measure at the rear wheel before and after and that's that'. If the dyno calculates back to crank and you measure before and after, what's the bloody difference?

Hello? Powermaster? Can you hear me?

The HP that's advertised has to be labeled din, or sae or? They're just engineering standards. I'm sure that they're the same for any type of vehicle (car, boat, bike) and rates the engine only. The engines are *bench* tested to read the highest (no alternator, gearbox, etc) but connected to the production exhaust system.

This all came out a few years back when the rags confronted the car makers on how exactly did they get those ratings ??!!

I'm sure that Aprilia is looking for REAL power (both street and racing) and has real-life dynos, and so has Honda for that matter.
It doesn't mean that they'll publicize those true numbers though.

I still see no purpose in measuring the real thing (rwhp) and then converting it with a "theoretical" formula to compare those numbers to the factory's inflated claims.
It serves no other purpose other than to play the same game as the mnfgs play: meaningless bragging rights.

Whatever you say, sailor.

You wanted the last word then?
oops sorry about that, better luck next time!

How about I have the last word then.

You are all correct at some extent, but put yourself in my place and try and sell an exhaust with "real" figures, not graphs.
Aprilia quotes 130bhp, YOU and I know that it's at crank,but do all the others? Nothing wrong with that and I do believe that such figure is possible with a blue printed engine, however this is the figure that stays in your head. Here comes Rene who like you wants to show the "real figures" being an honest guy he decides to tell you the truth that his exhaust gives you 98BHP on the TARMAC,

That's right 98 on the "roller" the lowest possible reading, the actual tarmac power. How many exhausts do you think I would sell?
Take another example and see what happened when one of my competitors decided to play a publicity stunt in doing a Exhaust shootout? No matter how much R&D, myself and other REAL manufacturers do and the facts(graphs) that we show. To some people, it was what this competitor's tests the most truthfull ones, see my point?
I wonder what the reaction will be when someone decides to do a shootout with his products?

The reason crank is use is for the very simple fact that the law wants to know the figures on the engine, as this is the part of the packadge that is making the power.

At work and while developing the exhaust or airkit, it's the crank that I work on, that's where the gases are coming from, after all BHP, Brake (engine brake) horse power.

Jorge, I think that you're in a unique position because you not only make the product, but also install it and tune your clients bikes.
I don't know of any other manufacterer that does both.

If a buyer checked Vinci or brand X, their web sites typically will show a before and after curve, with maybe a claim of x hps gained but no exact numbers...and really no one pays attention to manufacterer's claims!

We usually have to find out on the net from other owners what the results are and compare them in RWHP because that's what the (USA) dynos rate them in. It may not be "exact" but it makes it simple to compare, say the SP2 to the RSV.

The 'prilias seem to vary in power. From bike to bike (more than the japanese do) plus different tune-ups for different markets and multiply that by dynojet Vs. factory pro eddy dyno Vs. fuchs "crank'....makes my head spin with all those numbers!

At least we all agree that it's the "before and after" curve that matters, and thanks for posting detailed graphs.
Sorry for the bandwith

p.s. When I posted "no one pays attention to manufacterers claims" that didn't include you, Jorge.
Like I mentioned, you're in an unique position.
The closest to it that I know about would be Dan Kayle, who works mostly on RC51s in the US.
He does not make cans but he's both a distributor and a tuner who posts revised maps and dynos for the Sato exhausts (in RWHP BTW).