Anyway got back from the MotoGP at Phillip Island. Full story and photo's tommorrow or the next.

Here is a photo, to wet your wissle, of Regis Laconi and his Dunlop tyre technician deep in thought about what to do about those Michelin boys, and one of the bike......from the front of his garage as a friend and I walked down pit lane....look and weep guys. It's who you know, not what you know. 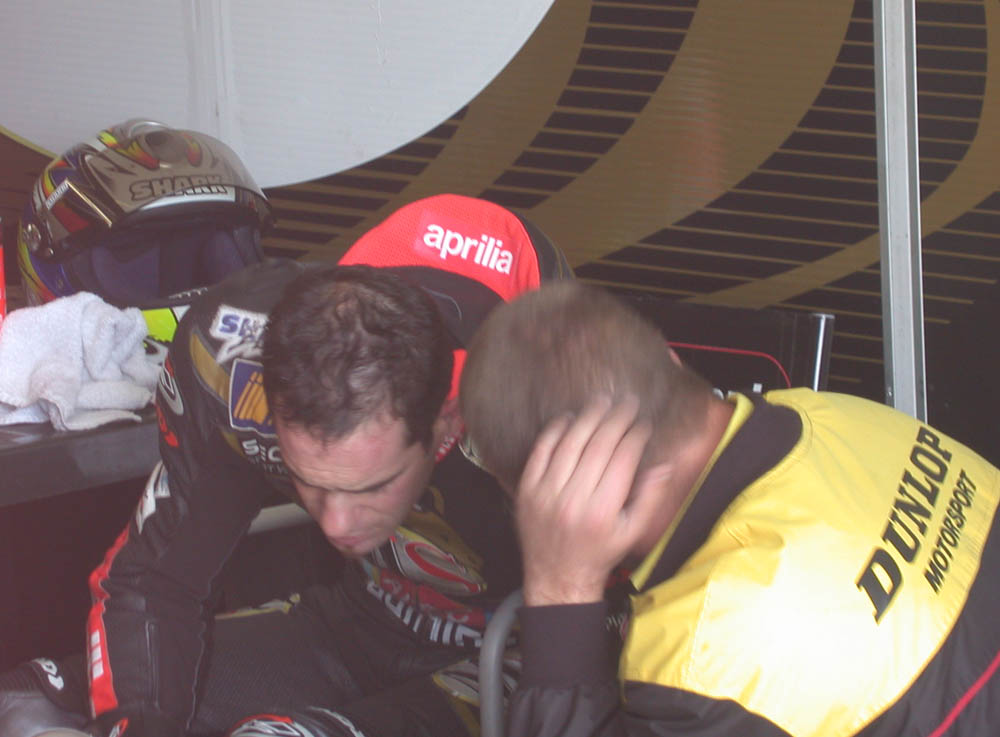 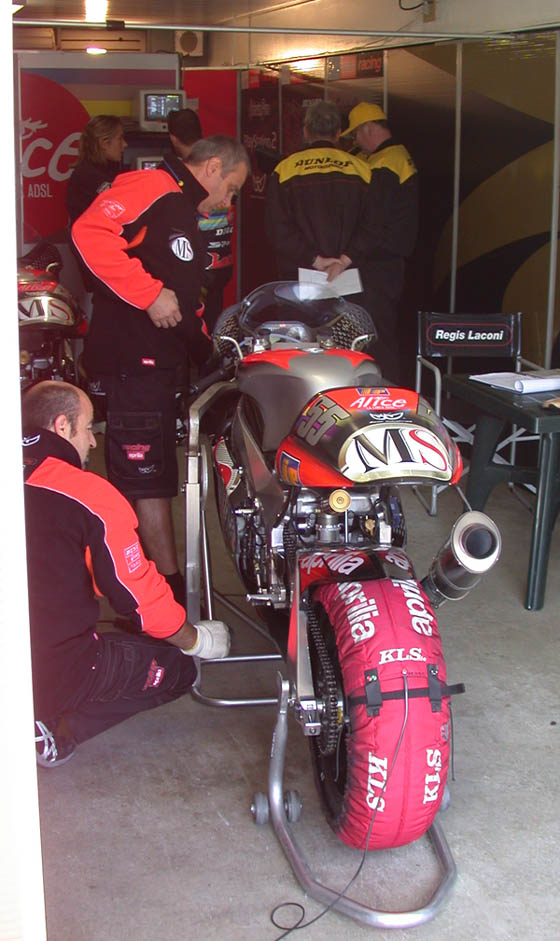 Really looking forward to next season to see what Colin Edwards can do with the cube, more than Laconi, I suspect. It is clear that some more development work is needed to make the bike more competitive - the results this year have neen a bit of an embarrassment for Aprilia, IMHO and do little to ehhance Aprilia's reputation as a mnufacturer capable of making competitive 4 stroke sportsbikes. The opposite infact. I think Edwards is going to need more than Michelins to achieve anything, Laconi is not a bad rider - the engine seems to be the problem and its inability to deliver its power in a way that the rider can exploit it. It seems to deliver loads of power that can't be used, which is a bit pointless. I am not sure how much money Aprilia have got to pump into it. Are they still going to compete in Superbikes? That series seems to be going nowhere.

Anyway, I doubt whether I will make it to Philip Island next year, but Assen and the British round are definites, maybe one more somewhere. Did Le Mans this year I might go again next.

BTW, you are a lucky B exedukenut to get to walk the pits.

I have a feeling that given a free reign Edwards et al will do great things on the Prilla next year. We all know the Cube has a lot of power, and being a triple, it should be able to make it in quite a manageable, linear way. Maybe its the EFI thats too blame (its got a std Falco chip in it

?) but sooner or later it will start to rock n roll. The Michelins and weight loss will sure help as well.
Does anyone know if the cube has traction control? or any other techno gizmos. It seems everytime I watch Eurosport the stoopid Julian n Toby plonkas start to rant about the bike being a working testbed but you never actually hear about what theyre testing? Helium filled tyres? Active suspension? laptop powered rider? None of the pics Ive seen show anything that looks particularly mind boggling. OK the things got a carbon rocker box and some pretty coating on the pipes. Still doesnt stop it from being too heavy. Maybe if they simplified the thing a bit it may work better?

Anyway, I have faith. If the Cube doesnt finish on the podium next year I'll eat my chip

That 'ride by wire' thingy they have must be tiresome. I pity the poor bastard who has to unravel the mile-long wire after each practice or race.

Does explain why he doesn't fall off much. They must have the 'simulation' setting turned off!

what is the advantage of ride by wire? It doesnt take long to oil a cable anyway