Hi all. I just took third place in a Dyno shoot-out. I was not impressed with the preformance of my Falco. I have put on the Renegade High-Mount Pipes and the air box kit and was only able to get 110hp out of the bike. I thought that seemed a little on the low side and was hoping someone can tell me why I wasn't able to get more hp.

Which dyno was it?
Is that 110 hp crank? Is it SAE? Is it DIN?
Where's the dyno chart?
Does your mechanic know how to set up an Aprilia V-twin?
How many miles has your bike done?
How long did it take to reach top hp compared to the other bikes?
What were the other bikes?

John, You have had the Rene system since February? Your comment "not impressed" surprises me.
The dyno Top end figures of 110hp, I assume rear? are about average (good engine,bad engine) If you look at the Rene site you will see that one of the dynos posted, reads 112.
What would be interesting to see is all the graphs and compare the curves.
If you do a search, you will find that Hansie,in Holland, did a similar shoot out and was very happy with the outcome of his bike's curve.
We at Renegade are no magicians, our R&D is done on Trevor's Falco and confirmed with many of our clients who visit our Dyno Centre.
We then compare them with other dyno graphs from clients all over the world, the likes of Bef in Belgium, Hansie in Holland, ScottQ (airkit only) in the USA, Exdukenut in Australia, to name a few.
Those who we have the privilege of dynoing it ourselves, not only get a dyno run but tend to have their engines, fully optimised, ie, throttle bodies synchronized, various eproms tested, etc. Those, like you, far away from us, receive the best compromise of the hundreds of our tests, what unfortunately we can not control is your full set up.
We have a very good example of two posters on this site, one who has a twin slip on and the other a full system.
The client with the full system could not understand why his bike had less power on TOP end, I did my best to explain and however the client may have gone with doubts, he trusted me. A few months later I had the opportunity of servicing both bikes and set them up accordingly, let's just say that the full system is now doing it's full job.

The difference between your shoot out and this two bikes, is that I have done both tests before (OE cans) and after. You may have been third, but what you have to consider is how would your engine compare with the original exhausts?
Another point to consider and this has been debated over and over again. The addition of the airkit has proven a gain throughout the reve range, yet when tested on dynos without any direct fan facilities the gains on top end do not seem to be enhanced, such examples/tests have been shown to many clients, when on our dyno we turn the fans off.
The same simulation has been done with other products without any changes in the results, the reason being that adding air flow with a set up does not improve the power when compared with another set up.

More than once I have suggested to clients to ask the tester to lift up the fuel tank during one of the tests just to see the outcome.
Of course I don't expect you to go riding with the tank lifted.
Such tests are simply to show, how the engine behaves with our aikit and more air available, the very same thing that happens when you are out riding. Corrected me if I am wrong, but was there not another manufacturer who provided spacers to raise the tank?
We have had a reporter in and tests were done to show him the above argument, we have also invited BenW, another reporter (falco owner) to pop in so yet again, we could do various tests, Ben does not have Rene exhausts so the idea is to find out if different exhausts will gain or loose with better air flow and the behavier of our airkit under the same circuntances.

Hi all. I just took third place in a Dyno shoot-out. I was not impressed with the preformance of my Falco. I have put on the Renegade High-Mount Pipes and the air box kit and was only able to get 110hp out of the bike. I thought that seemed a little on the low side and was hoping someone can tell me why I wasn't able to get more hp. I was beaten by a cbr929-129hp and a cbr954-133hp. I have the print out but do not know how to post it.

You really didn't think you'd beat an in-line four with your V-twin did you? Come on, tell me you're joking!

You just can't compare the two. Try comparing midrange and torque figures, where a twin is at its best. Grunt out of corners is where a twin will win, not at peak revs. I for one don't give a jot about peak power figures - they aren't representative of revs where you spend your time riding around. How often are you at 10,000rpm? Probably less than 1%. How often are you at 6,000-8,000rpm? Most of the time. That's where you need the power, not in the land of fairytale pub-bragging.

Was 110bhp measured at the rearwheel? What was the dyno make? Dynojet? Fuchs? etc. As Beffy says, there are so many variables that you haven't told us.

Let us know some more please!

OBTW, one thing THAT NO ONE EVER TALKS ABOUT is area under the torque curve...

Well, I have a suspicion! Anyway...I'm going to have access to a dyno soon...and I look forward to creating more controversy...it's interesting to note, additionally no one is brave enough to try to quantify "seat of the pants" changes. I'm happy to report that the change to the Renegade airkit made a huge, almost startling change in MID-Range...which is just what I wanted...being that peak power is ABSOLUTELY MEANINGLESS to me.

Send the dynos to us and we will print them for you, meanwhile here is a similar test. Look at the power and torque from the Falco. 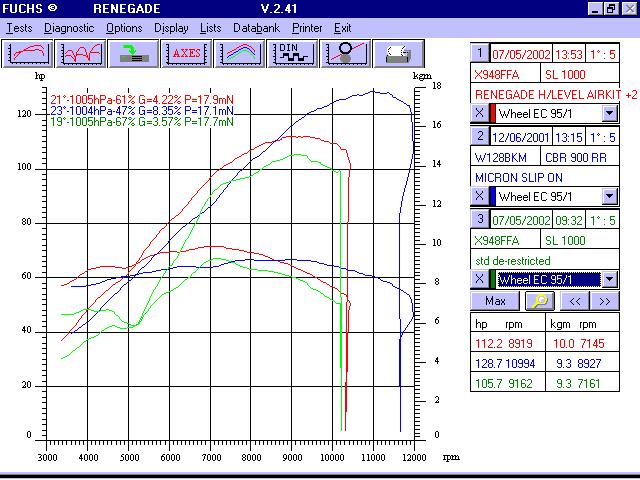 Apriliafalco,
scan the printout, save to your harddisk, do \ image{the name of your image} only without the space between \ and {} and you will be asked to upload your image. And I'm absolutely the last person you want to take lessons from in this department!

Only today someone told me about a Honda Dax that did 170 kph, that's 106 mph! When asked if they could actually confirm this speed themselves, the answer was of course 'no'.

If I compared my Falco to Rossi's RCV chances are I'd be disappointed as well.

I was trying to upload the whole page and it would not do it. Hopefully by timming it down this will work. The Dyno was a DynoJet and it was rear wheel hp.

I will do it for you 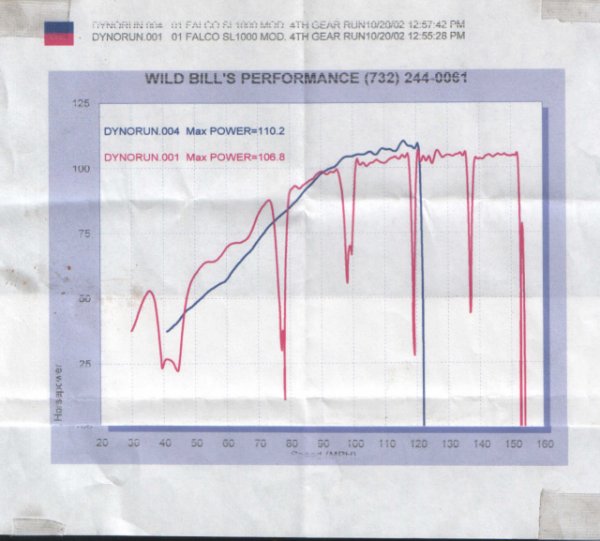 Looks like it's running a little bit rich at the very top end - maybe leaning it off a little will add some more at peak revs.

Take a Dynojet dyno and all the RSV engines are gonna run rich at the top end. Reason is they're not getting enough air because Dynojet doesn't have proper fans to try and imitate real road conditions.
This is me being a cynical bastid again btw

Why do runs in 4th gear anyway Floormaster?

enuf of this PM name messing,

...he may never use his magic button again!/clipart{scarythought}

Here is mine Apriliafalco for comparison with no known tweaks for your reference, all the way from Australia... 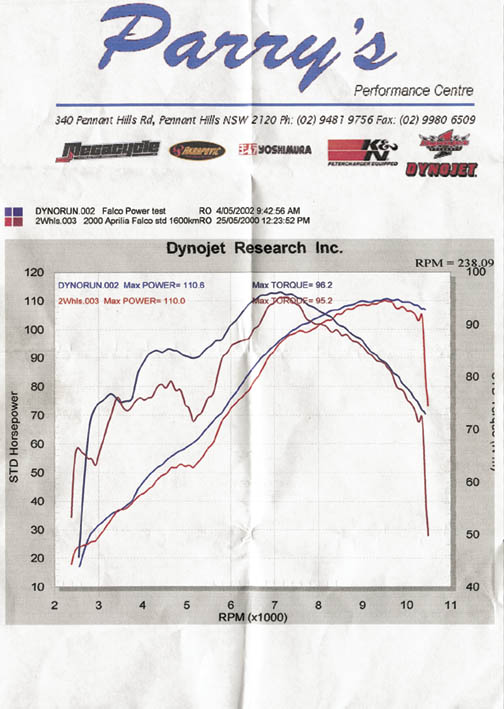 Should just add the red line is with RSC pipes and no airkit, the blue line is Rene's pipe chip and airkit. Hope this helps

Also, here is a side by side comparison, scaled identically as close as possible...

It looks to me like we've got results for three different bikes (but near enough identical set up) from three different dynos dispersed across three continents and they all show the same result - so, anybody want to talk about my magic button (

Really guys, "Wild Bill's Performance?" Tell the guy he needs to change his name. He loses a bit of credability with that name! Sounds like he actually got 110 horses to line up next to your Falco in a drag race!

Seriously, though, looks like the Micron could help you keep up with the inline 4's, but we could all buy inline 4's and do that! Midrange grunt and torque curve is the stuff, and it looks like Powermaster has tuned his system that way!

I didn't know that we were having an argument about a 900 and Micron, the reason I put a micron on the graph, was simply to give an idea of the type of power AP went against, whether a Mic, or a Rene the differences would be the same.

Dynos can be done in fourth or fifth, the power output changes very little, what I find strange is how the power through the gears do not show higher figures? I have a feeling that the tester did not go all the way and short shifted gears.

...or wheelspinning just to keep the numbers low!

I was only kidding Jorge (just pretending it was a falco with 128bhp at 11k)!

The comparison graphs are certainly very impressive, not only in terms of gains but also how much smoother the curves are. I think we all like smooth curves and not just on bikes!!

I am really having a hard time concentrating on these posts today.

Of course it is a CBR900 with a Micron, it says so doesn't it! Man, if I didn't have to work for a living, I could spend even more time reading these threads! If I didn't have a job...

I guess I better wrap this up, so I can keep my job and pay for my toy!!!