I have just put my new bellypan on. I bought it from rsvr, price £89.99 and it arrived when they said it would, no probs. The instructions are in French, and as I don't speak any French this was a slight problem. I found some instructions on the rsvr site, which were OK until I reached step 6 of 7 and discovered I had to drill a hole in a lug on the frame, which could not be done with the bellypan in situ, resulting in steps 1-6 being retraced. "Oh dear, what a nuisance" I said.

The bracket required to fix the rear right hand side of the bellypan (which also requires the drilled hole in the lug) is the wrong shape to fit at the angle necessary, this needed some modification with a file. One of the holes at the front of the bellypan does not align properly with the thread at the top of the oil cooler. I could not get the last allen screw in - this will necessitate the hole in the bellypan being slightly enlargened. I will get this done later.

The local paintshop managed to get the Aprilia paint chip, but the colour match is not perfect. The bellypan is lighter. I have been convinced for a time that the yellow paint on the bike is getting deeper in colour as time passes. I wonder if anyone else has noticed this - or is it just a figment of my imagination??

I want to get some red Aprilia transfer decals - does anyone know where these can be sourced?.

Try again with the picture. Had to resize it and ran out of time. 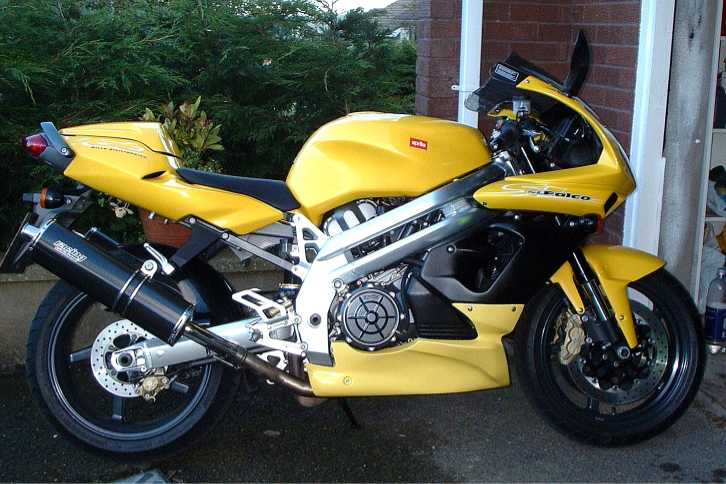 Islefalco, I would say that the yellow falco is much enhanced by your belly pan,

never did think the 2k falco looked so good with the side panel in black but your,s looks great now. (just a personal thing)

Try using some T/cut or similar to get your paint to come up lighter on the top.

The falco decals are availiable from Aprilia, mine took about 10 days to arrive, you get the whole kit with every decal and sticker you ever wanted but at a price, just a bit over £110

Or, some copy-cat decal makers are selling decals on eBay for cheap. You might try them. If they aren't selling the color you want, they can usually make it--that's what I was told anyway.

And not caused by me (don�t ask). Lets just say Motor Sh*%y.

Also have the Topline,bought from Rhencullen,fully painted.Was bloody dear (ouch).
Had to cut part of the bottom out of it to clear the front exhaust pipe.It is a pretty tight fit.Araldited some brass honeycomb mesh into it to protect the oil cooler.
Finishes the bike off really well.
Ronnie

Hmmm...
Went out on the bike this afternoon and smelt burning plastic/fibreglass. Had a look underneath. The fibreglass is not touching the pipe but is close. I estimate about 5mm. The fibreglass was hot to the touch.

I think another slight adjustment is going to be required, involving cutting away a part of the bellypan closest to the exhaust. As this is on the underside, it will not be visible, but a pain in the ass none the less. 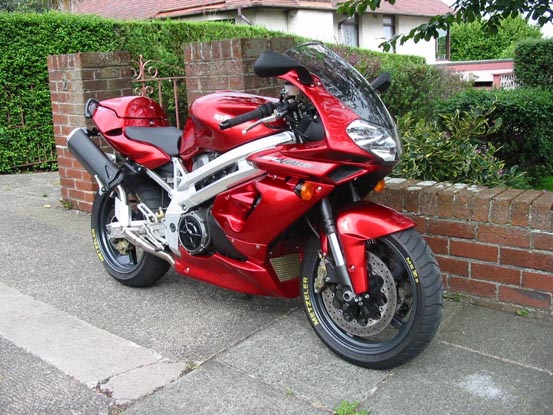 Nice Ronnie, did you have any problems with burning? after seeing decent pictures of this mod I am tempted.

PS ,I read again, see you also had to modify.

and i thought i would be the first to post a red one!!! 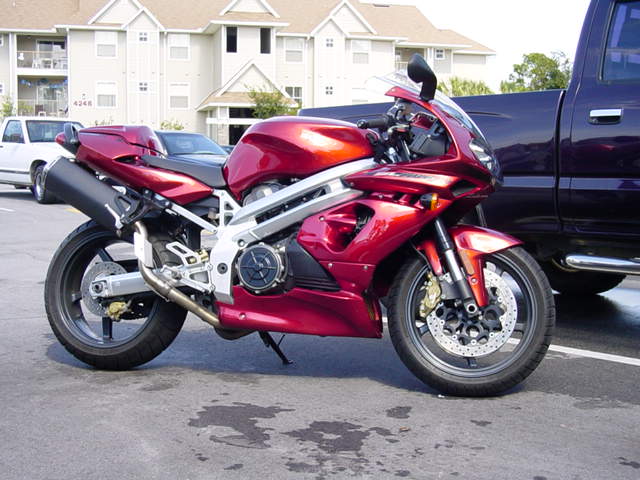 What mods did you have to do to your pan - particulalrly in the exhaust area?
Cheers,
IF

Basically I took a slice out of the base following the shape of the exhaust. My pan would not fit at all due to hitting the exhaust. Removed the exhaust and found it fitted ok so knew the mounts were in the right place.
Length I cut out was about a 9 inches long and half an inch wide.Cant be seen from the side but can when wheelying! Exhaust has better clearance now (about quarter inch) so less chance of burning.
Tapped frame lug 6mm and used Nyloc locknut on suspension bracket mount.
Used a hacksaw blade taken out of the hacksaw frame to cut it.
B&Q supplied the brass mesh.

Cheers Ronnie. I'm going to be cutting it tomorrow, but no rush the forecast is rain and wind for the next few days.

I'm sort of pissed off about having to modify it. I did read somewhere - probably on the thread about techonoflex shocks, that the exhaust systems differ bike to bike. I can't see why that should be with mass production manufacturing, but it may explain the need to mod the bellypan. My attempts at trying to get one of the front allen screws through a misaligned hole on the pan have resulted in one of the threads at the top of the oil cooler being messed up. Another fix required. I thought the bellypan was supposed to be a 30 minute fit......

what did you guys have to modify? i have had no problems with my topline except for clearance where the shift rod is. all i had to do was readjust the bracket on the left side. no cutting. no exhaust too close or anything.

Like you Pbeachcruzer I had no mods to do except fiddle with the bracket on the right side. It fits perfectly. The only downside is having to put clear backing on the area facing the front wheel due to stone chipping.

Hey, Ronnie! Nice bike! I hope the guy with the Harley doesn't get mad that you took his parking spot! I guess he'll have to find another place to park his oil leak!

He can park it anywhere he likes as long as it doesnt get too close. Dont want them to breed.

the oil leak is water (just washed the purple yota) and it wasnt ronnies bike. sorry for the confusion

Doh! Guess I need to read through these things a little more carefully! Are you guys trying to look identical? Cause it's working. I like the look of the streetfighter cans. I can't decide about the bellypan, though. I think I like Peter's better, right Exdukenut?

I too prefer Peter's bellypan. I just can't decide to buy one or not.

Here's his adress if you want to query: Peter Pikfee (Any kick-back, Peter? 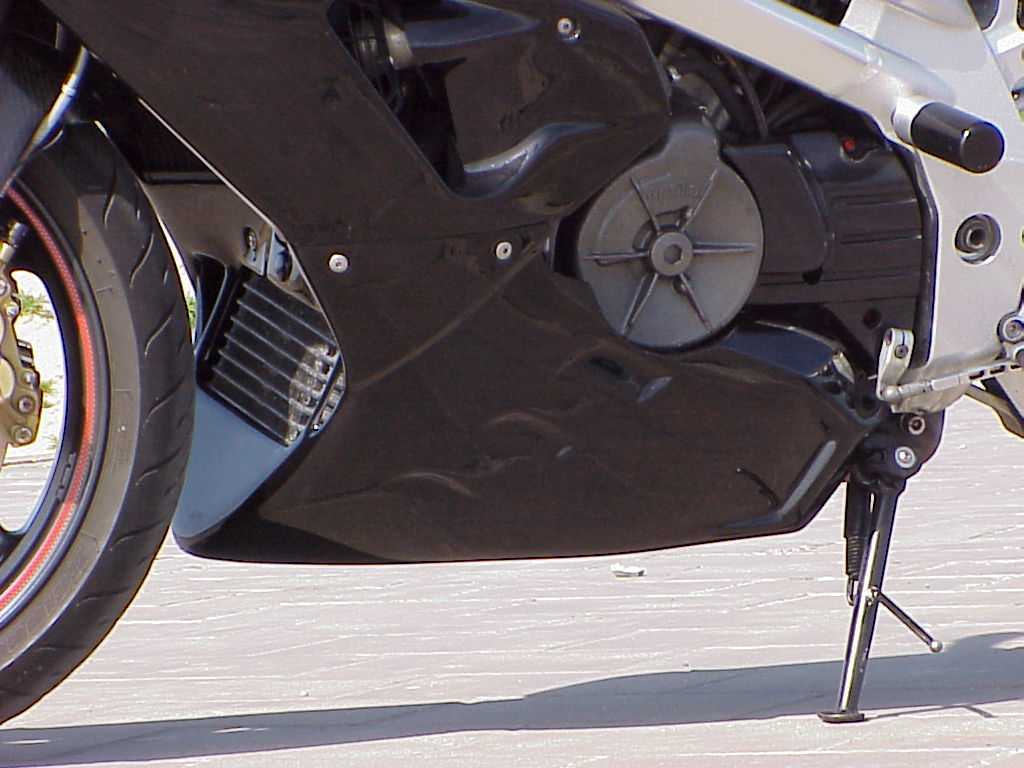 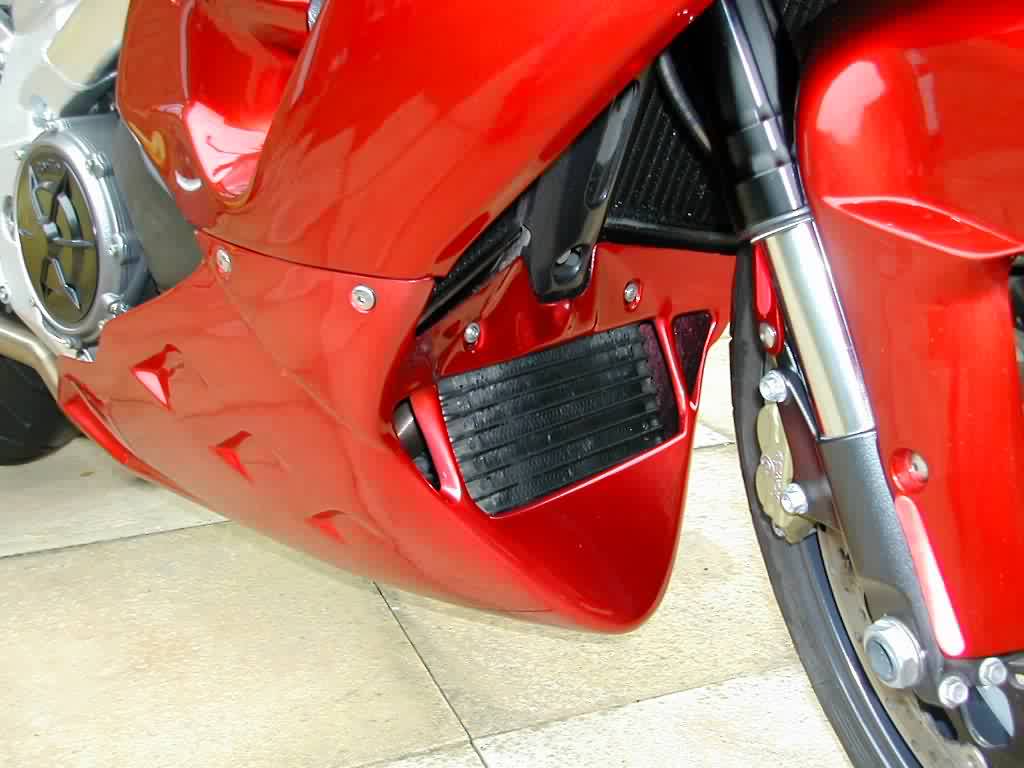 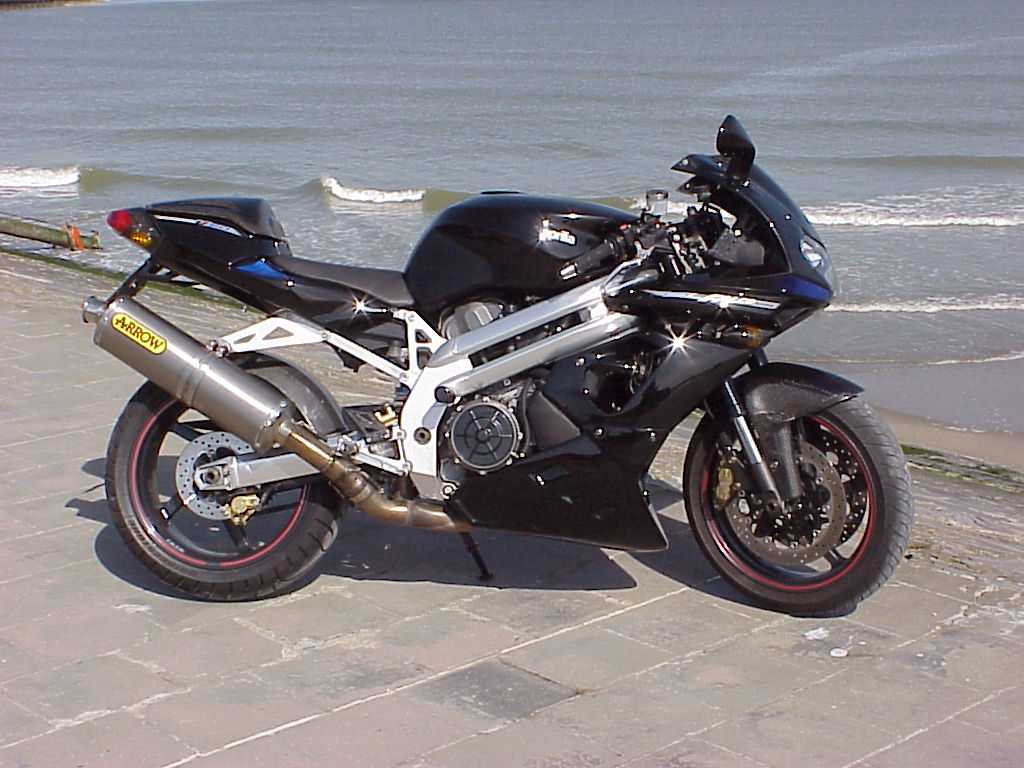 He's also got carbon fibre windscreens like the one shown above. It is shorter than the stock screen and cleans up the lines a lot. Those 2 items are my next purchases.

I've just ordered and received Peter's belly pan & crash protectors, (took a couple of weeks)dealing directly with Peter was fine, but the quality of his parts is outstanding, crash protectors fitted straight on (bit fiddly with the left hand mount )and look great and the belly pan uses the original 6 mounting points so no extra work involved. Looks great and lined up perfectly. One happy customer!. I'd reccomend him to anyone

If anyone is interested in a "Pikfee" bellypan, I have on in Falco Black for sale.
I had it mounted for a half year but removed it after an oil leak.
Didn't mount it afterward because I like the bike better half naked.
For any serous offer it's yours.

How much?
Drop me a line.

I send a mail incl. pictures to the e-mail adress mentioned in your profile.

Pbeachcruzer, where did you get yours from? Did it come painted? If not did you paint it?

it came from the online store at apriliaforum.com. it is made by a company called topline. it comes unpainted. i had a friend of mine color match the bike and spray it. real pain in the ass since aprilia wont release their paint codes.

anyone unfortunate enough to have tested Peter's crash bobbins?

Got the bellypan sorted, eventually. It is now properly fixed on, the right colour and looks the dogs danglies.

Not tested any crash bobbins. Last time I crashed there wouldn't have been a bobbibn made that could have protected it. No half measures here!

I wonder if I could sucessfully match the matte black on the '02.. hrm...

Check the RSV forum for that.