Firstly thinking of getting it rebuilt before hand to suit me. Is this possible?

Second, is there anywhere that describes how to fit it? Never done one before!

wouldnt bother getting rebuilt unless its leaking or undersprung. I can recommend Revs racing for shock rebuilds and customisation.

I have fitted a Maxton shock, it's a doddle. The hardest part is suspending the rear of the bike. I got round this by removing the pillion seat and hanging the bike from the frame inside the seat, up and over the roof joists in my garage.(didn't think the grabrails would be up to it)
It's also a good idea to use a paddock stand as it gives you a bit of extra lift to start off with. Good luck...

Bonerp,
Be aware (if you aren't already) that if you crank the rear ride height right up, which is nice for the handling, the bike will be cranked over at a precarious angle when parked. I've got a small alloy blocked fastened to the base of my 'stand to sit the bike back up. It might be worth you going for a compomised ride height as I believe Crmc has.
Crmc,
Have you got any further with your proposed 'stand mods ? I'm liking the sound of the GSXR600 'stand, just waitng for someone else to try it first though(bloody coward).

I have now got the machined plate fitted and could take some pix this weak-end. Its a pity I ground some of the stand-foot away at a Cadwell Park trackday before I fitted it!

Looks OK tho and does the job of stabilising the bike.

Ride height is cranked up now!

Doesn't sound a bad thing grinding the stand away at Cadwell, good work

Look forward to the pix.

Finally got round to taking a pic of my little masterpiece. Its a bit rough n ready at the mo (I'll anodize it eventually), but the main thing is it works! The bike has a perfect angle of dangle and feels much more stable. It would of course look neater without the Cadwell scrape marks on the original stand base! 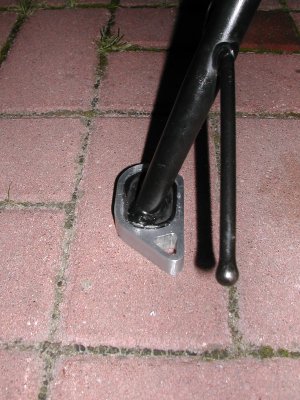 Gonna try to copy it , do you have a drawing or CADfile for me?

Are you in the market to make me one???

I'd obviously cover any costs.

I think it's the best looking solution I've seen to the problem. Cheers,
Andy.

Congrats, Crmc33, but is it attached somehow? Or do you put it in your pocket and take it out when you need it? Won't the bike fall over while you're looking for it?

I've just fited a Mille shock and the bike looks ready to fall at any moment. I've taken to carrying a 3" long piece of mahogany skirting board everywhere I go for peace of mind. Handling feels great mind!!

CRMC if you feel like making a run of these then add me to your list of buyers.

The plate currently attaches via a M6 bolt.
I Should be able to make some more, but to avoid the wrath of Hammy etc, please email me

Looks good Crmc, same principle as mine but a damn site neater.
I borrowed a mates gixer 600 'stand the other day. It fits straight on and protrudes out a lot further from the bike when down, leaving it at a nice angle and making it a lot more stable. The only problem is that it touches the exhaust (probably sortable) and may limit ground clearance, but I suppose it's a case of suck it and see.

Hi Nick, when you fitted the GSXR stand did you use the GSXR stand bracket or the existing Falco one ( I'm refering to the bracket assembly between the stand and the engine). Does it bolt straight on or are modifications required? How about a pic?

Crmc33, does the stand pass the BefTest? ie, have you had a mate crouch down next to the bike to examin the modded stand, closely, then, push the bike upright, let go, and let it fall back onto the stand on its own, thus demonstrating that the stand works, and scaring the shit out of your mate in the process?

Nick, what did you do with the stand sensor?

By the looks of it, I'm sure it will Dave. I never knew you scared so easily.

I still drop it onto the side stand btw. Shows how strong it is.

I'd advize some Loctite when fitting the bolt tho, Crmc33. Lots of vibration (and temperature stress?) in the side stand area.

Good thing is you don't have to re-spray the side stand after fitting it, contrary to welding.

Only downside (not for me, I think it's perfect!

) may be the fact that you have to cut a 6 mm thread into the base, if I understand correctly. Might be too much to ask from some people.

Redlionfalco,
I used the Falco bracket cos my mate didn't bring his Gixxer one. It does bolt straight onto the bracket, but touches the exhaust as stated before. I only gave it a quick try to check the suitability before trying to find a 2nd hand one.

Dave,
I didn't really give the switch much thought as I'm not that bothered about retaining it.

So did you just disconnect the sensor? I'm asking out of curiosity because I suffered broken plastic lugs on an early one, and I'm too lasy to disconnect me own...

UK Suspension in Bradford are very good for Fork & shock re-builds,plus they'll adapt the spring rates etc.. to match your riding style & weight.
Ask for Andy, and no I don't work for them or own the company, but they got my previous Bandit 1200 handling nicely. Not a patch on my Falco though

I can confirm that the stand passes the ISO9001 Part 1 Bef Test.... tho I havent gone as far as dipping it in Mayo yet

i just recently removed my stand switch due to broken pin. making the bike run after the switch is removed is no problem. unplug the wiring harnes for the switch. its underneath the tank on the left side. cut the wires off, remove the middle one and connect the two that are left. your warning light will never work again, but the broken switch wont keep your bike from starting either.

guess i should have mentioned that you cut the wires on the switch side of the harness.

cheers for that Pb.

I think we should all be a bit more generouse towards our feeble little stand, as
1, altho I've shat kittens worrying about it falling off the stand, it never actually has, even having been jacked up with new shock
2, its not sprung loaded...

CRMC33,
When you filed off the valve for the shock, does this mean the reservoir cannot be regassed?

I might try your alternative suggestion of filing off the left hand side of the shock. Will I need a spacer/washer on the opposite side?
Ta
P

you should only need to file half a millimtre or so off the end of the valve, just so that the inner is flush with the outer threaded part. This should not effect the gas pressure and shouldnt effect the ability to repressurise the reservoir during later rebuilds.

Of course, you could indeed grind some material off the left hand side of the mounting bushes and space it over to the left slightly.

Basically, there are a number of possibilities, I chose the valve mod method for ease and speed.

The filing method works great as you stated. I just installed the mille shock on my falco this weekend using your installation information from Daz' site. Thanks for the information and what an amazing transformation! Almost as fun as derestricting.

The filing method works great as you stated. I just installed the mille shock on my falco this weekend using your installation information from Daz' site. Thanks for the information and what an amazing transformation! Almost as fun as derestricting.

Maybe I'm worrying too much about pressing down on the valve inadvertantly whilst filing it back!

I did it with an angle grinder so that very little pressure is required.

OK well I've got one for tonite so I'll try then!