MCN this week stated that next week they will have pictures of the new Laverda sfc1000..

So the pictures that were in last weeks paper could be wrong... I expect the 2004 Aprilia will the triple, and the v60 will be come the laverda range...

Could be good news... As i have an old 1980 Laverda Jota triple in the garage... keeps the Mille company...

You have a Jota?

The mags say it didnt handle, but koni's on the back and the old pirelli phantoms, handled like a dream compared to the competition..
The clutch was as heavy as f*ck, but you could crack walnuts with yer left hand.
All the switch gear was Suzuki, clocks by Honda, electronics by bosh, stainless mudguards, alloy wheels.....

During its day it was the bollocks...

does it have the porous cylinder head like my bruv's did?

No it has a steel head cap inside the cylinder head...pinks like f*ck on normal petrol even LRP.

Check out www.laverda.com sfc1000 using mille engine... look cool though.. it comes with side panels/belly pan if you want it on the track etc..

Dont buy that Mille yet Bef....

Wow!
I like that one!
Think it over Bef.

looks like a falco frame and tank mixed in with an RSV rear end. Looks very tasty!

Wo - that is sweet. I was thinking the other day though that I could do with more wind protection, it was freezing cold and pissing down. At one point I think I would have even rather been in a car.

The screen on that thing looks tiny, I don't think it would ruin the look to have it a little bigger.

I'm going to buy one of those one day soon.

where is the emotion for uncontrolable drooling?

While it's georgous (yes Jim, where is that drooling emoticon, & although the rear tail section looks a bit poxy IMHO), I'll stick with my Falco R thanks. It's all I'll ever need now I have the RSVR front end, the Ohlins rear, the OZ Wheels (just picked them up from the seller),, the Brembo Cast Full Floaters, the TNT system & Airkit from Jorge, and the polished arm (soon to be on).

It shows you why the Falco wasn't developed further by Aprilia, it went to Laverda!

Interesting that it uses one 57mm throttle body and one s-plug per cylinder. Will the hairkit fit, PM?

MCN posted today that both the special edition and the production model will go for sale "after the first of the year".
Fat chance of that, they may want take orders at the show but we're just days away from '03 and all they have is pix of a "work in progress" special edition.
I've taken the liberty to photoshop LED turn signals and a slight revision to the lower fairings: 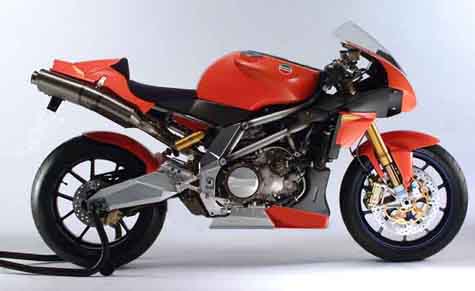 I must say I like it!
That doesn't mean I'd buy it tho.
I like Bimota's too. Never had one.