5{ couple of weeks I've been commuting 2-3 miles (through traffic) to a a job, and with no weekend jaunts (as the weather has something to be desired at the moment). Coming back from work today I managed a staggering 66.4 miles until the fuel warning light came on.

, on a burn through the countryside I'll easily get near double this. I have warmed the bike everyday until 60 deg C before heading off.

How far or should I say short do you guys get in town?

Incidentally I'm sure the tank is not 18 litres, as I'be just managed to shove 13 litres of Essos finest.

Basically .... mileage WILL suck around town.

The tank IS 18 litres, but the fuel light may be coming on early. When mine comes on I only get 13-14 letres in it, but if I keep riding I have gone another 40 miles and then filled 17 litres.

Sounds like you ride at 8-9K rpm all the time Mr_Venjer.

Most I've evr got into my tank was 17.15 litres, and that was very patient filling at the end.

On the VTR1000f aka Firestorm aka Superhawk aka Fartstormer aka Chicken Hawk I used to average 30-32mpg (US) around town.
On the Mille I get 38-40 commuting or touring, so no complaints.
Reserve light comes on too early with only 3.2 US gallons used at anywhere between 100m (31mpg) and 130 miles (40mpg)according to how I ride it.
The most that I dared ride was some 155 miles and there still was fuel left.

BTW there's always a 1/4 gallon or so at the bottom that doesn't reach the carbs ( or fi) on any bike.
I expect the usable tank should be just under 17 liters.

If youre only using the bike for 2-3 miles each way then the MPG will be bad. The bike will always being running on its richest settings and the motor will be drinking more juice than George Best after a hot curry

Maybe you should get a new job further away?

CRMC33. My daily commute is only 4 miles each way. Maybe this is why my mpg is so low. At the weekends I go out further but its my weekday mileage which is shite.

I didn't know it drank more early in a journey.

Cold engines use more fuel and warming it up beforehand burns fuel aswell.

My bike gets 0 mpg while warming up on the side stand or when it's stopped at a red light!

Seriously, I find it very cold blooded for an injected motor and I live in South Fla (tropical weather to you).
I wonder how much worse it is in cold weather.

My work commute is 15 miles each way and I get between 95 and 100 miles before the light comes on.

I don't bother with the 'wait-till-60-degrees-warming-up' proceedure people seem to go through. I couldn't sit there waiting for it to warm up like that anyway... not with all the racket it makes (courtesy of an Aprilia RSC Ti EVO). My neighbours would get too hacked off with it all!

I start it up in the garage and by the time I've put my gloves on and wheeled it out, it's already showing forty something degrees. I then don't go above 3,000rpm until 60 degrees.

I always thought bikes warmed up faster and were more efficient if you just rode them off (gently does it, of course) from start up...?

One reason is that when the engine starts up, it has to pump oil throughout to lubricate the moving parts. In a cold engine, the oil is thick and resists flow ("intrafluid friction"), which means the engine has to work harder to overcome the friction.

Another reason is fuel combustion is much less efficient in a cold engine, the air-fuel mixture has to be made richer to compensate for fuel vapor condensing on the (cold) inlet and cylinder walls which leads to incomplete combustion.

Sir, is that enough information? do I get a gold star? 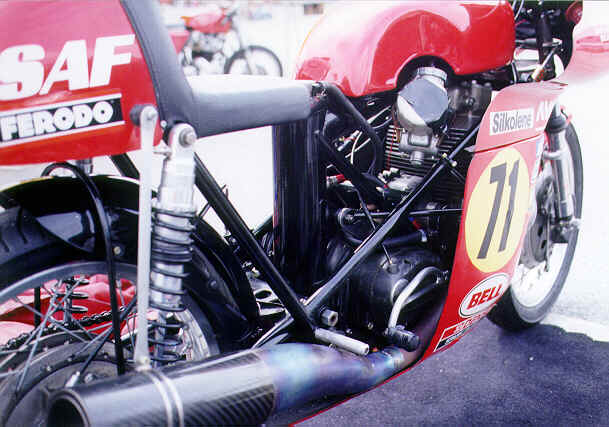