Here's the results of my Pc III setup today.

Hobbsport where recommended to me by 2 work friends also they are listed on the Dynojet website, so I presumed they would have a Dynojet dyno WRONG, they have a Superflow load dyno similar to the Factory Pro dynos, which use a much larger load on the drum to give a more road realistic result, so please don't start saying I got this here and that there, just look at the before and after curves.

The best way to describe what the Dyno looked like is to say it looked like the inside of Dr Who's Tardis.

My setup for both runs :- 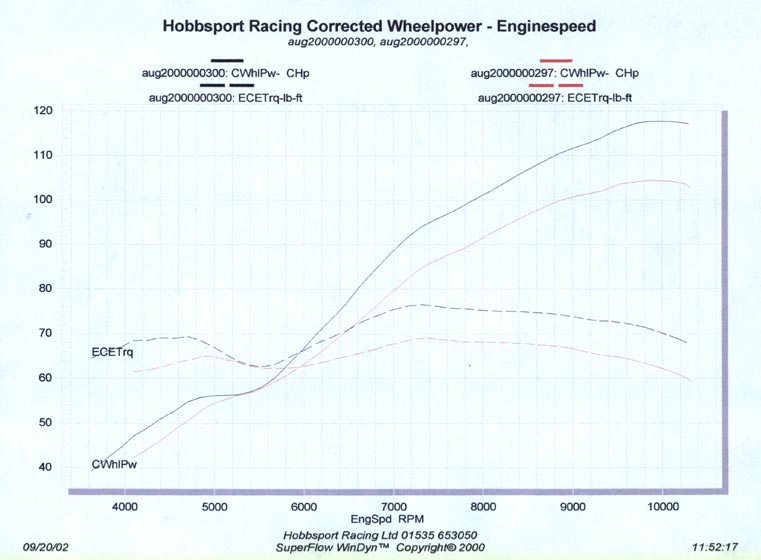 I got pages of print outs and I've just been looking thro and trying to understand it, this is what I have got ( I think )

A big thankyou to Jorge yes thats Jorge and not a typing mistake, for he is the one who got me a cheap PC III, when he sorted Morphs bike out he made the PC III redundant and I got a bargain.

Well As you are thanking me, (no charge )

, Could you tell us what set up the red line is?

The same on both runs

If you don't mind could I pick your brains please, I've been told this dip around 5k is due to the std headers do you agree with this.

No I don't agree.
You are showing us two runs where you are saying that they have the same set up on both runs, yet they have different corrected rear wheel BHP, what has changed to make up such difference?

Well this is very nice, very civilised.
Easy Taff, good boy. Jorge, stay, I said stay. Taff, sit, SIT, SIT DOWN!
Jorge back, get back, BACK IN YOUR BASKET! Taff NO! Oh s**t, MEDIC!!!

Welcome back Singlesman but I refuse to bite tonight I'm to happy, I've gained 13 hp I'm a year older and wiser.

i am amazed that just adding a pc3 and a mapping gives a 13hp increase. are you sure you have wheel vs wheel reading and not crank vs wheel? When I put a pc3 on my zx12r with a full yoshi race system the increase is nearer 3-4 hp, not 13. That had 175 at the rwheel.

This 5K dip thing, I would guess that if the PCIII cant iron the dip out then its gotta be ignition curve related? or maybe linked to cam timing (mine are stuck on half past two)?
Anyroad, it looks like youve got a decent bit of power ...no excuses for slow laps of the local roundabout now!

Maybe he found the magic button

I don't know if this would make a difference but my bike from new ran very very rich, so much so that when you stopped people used to ask if I had a fuel leak the smell of fuel was that bad, also people riding behind me could smell it when I was riding. I ran for a while the Evo fuel pressure regulator to drop the fuel pressure, this helped but it still smelt of petrol. I was asked by Hobbsport to take the bike in set at the std settings, they said they had never seen one so rich and took fuel out of every where, it is the best power increase they had ever managed but sadly not the heighest figure they had seen.

I've been told the dip at 5k is down to the std headers, Jorge disagrees but he never said what he thinks it is.

I think the dip might be the ignition timing? The standard chip will be set up for the emissions tests and I believe it has the ignition retarded around 5k revs. A PCIIIr would solve this on a 2002 bike, but for older bikes I guess you need another chip in place first then a PCIII?

Would the Arrow chip sort it out?

Thanks for the input Dave, but I have tried the RSC Evo and the FP 1413 chips, both where good in their own way but both still had the dip, what did make a difference was swapping airkits to the Evo race kit, as you can see from the original power curve, its a good shape although down on power.

The pc 111 has done what I was after thats to sort out the fueling, the dip looks bad but on the road its no real problem.

I've talked to a couple of Aprilia Challenge lads and they run the Evo can with Arrows headers and modify the link pipe to suit, I might make this my winter project.