Here's a link to the site. My only claim to fame is that it is my bike in the pics.
Will install the set they just sent me this weekend. Hope the Hi-mounts will fit with them
http://www.ventura-bike.com/english/whats_new/latest_fitments/display_picture.asp?fitment_id=693

This is a good luggage system, brackets can be fitted and removed in around 30 mins 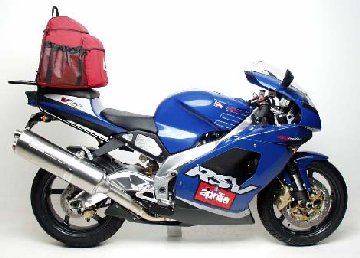 I installed my set of luggage racks and the light guard this weekend. It was very simple and took about an hour with all my stuffing around and getting side-tracked with other things I want to do to the bike.

Most importantly, the grab rail is further forward on the bike than most, so it is in the perfect position for the pillion and they dont have to lean backwards to reach it.

This also means that the luggage sits further forward so the weight isnt as far back over the rear. Hence better for handling.

Incidently, it looks a hell of a lot better in the flesh than in the photos.
Cheers
Scott

Bugger
I had the ventura system on my zx12 the best in my opinion however I was told by motohaus it was coming out last september I waited till june now its here and ive bought a bagalux and sold me old bag.I have the hi level renes on my bike do the L brackets use the bolts underneath the seat????
Regs Wosser

The L brackets use the rear bolt of the pillion footrest and then bolt on to a new bracket that is added, under the seat, in front of the seat release mechanism. This bracket is attached to bolts hidden under the rear cowling by the lights. Very simple to fit.