I brought an imported new 2001 RSV (not an R) Mille from a local dealer. After the 1st service (and derestrictions) i have gradually built up speed on it, but i seem to hit a 145mph barrier, which is 30mph short of the published top speed. (I might be campaigning it at the IOM TT, so am keen to find the 'missing' performance - HONEST!)

Firstly, the blue/green wire has been cut, there are no restrictions in the exhaust and the airbox is unrestricted - all performed by the dealer (i've checked). Having spoken to them they advised me that they used to do all this after the 600 mile service (to prevent over thrashing whilst running in), but they could not guarantee that the bike would come back to them for the 1st service, so now they do it all before they sell them.

So i decided to look a bit deeper to see why it appears to be 30mph down. The EPROM on my friends '99 RSV-R is an E29 (if i recall correctly). He has spent considerable time and effort messing about with his EPROM in the past and discovered that the 'special' EPROM that came with his Arrow can was identical to the standard version (also fitted in many Peugeot cars!).
HOWEVER, my EPROM is marked as a RP58. I do not know if this is because:-

This unknown EPROM has made me slightly nervous. Should the wire have been cut for this EPROM or will the bike now be running super-lean, for example??? I guess a visit to a Dyno with a Lamda probe will tell me. I've got my friends selection of E29(?) EPROMs to play around with and the Arrow can, but i rather prefer to know what does what rather than guessing.

I will contact Aprilia UK for some advice, but i suspect that they may be slightly less helpful because its not an official UK bike, or can anyone dispell this myth...?

I have not yet identified the true origin of the bike (i.e Dutch or otherwise). The chassis number begins with ZD4RP. This does not tie up with any 1999 Dutch, German, Belgian, French nor American numbers i've come cross yet. Once again this might be because its a 2001 model.

All that said, i did do my 1st trackday (since a prety biiiiiig crash at the TT in 2000) on it on Thursday at Donington and it didn't feel too restricted, although my highest terminal speed was 126mph, so nowhere near my 145mph barrier.

So my final theory is that i have not been 'caining' it enough through the gears, instead expecting it to pull through in 6th (overdrive) gear. I'm told that -1 tooth on the front will liven it up a bit...

I have/had a similar problem with my 2002 Mille. When I was riding with my bike on the Nordschleife I could't get more than 220 kmph out of it (normally 260/270 kmph shouldn't be a problem). My bike is fully derestricted, so no problem there. I tried the same thing a couple of weeks ago (only this time on the road) and exact the same thing (220 kmph and that's it). I was planning on testing it on a Dyno, since my dealer couldn't come up with anything either.

But today I've tried a similar thing, the only difference being that I switched gears later (higher revs), this looked like a lot of improvement. Sadly I couldn't try harder (it was on the road you know ;-) but I guess this was my problem. Both first times I got stuck at 6000 tpm (a rather critical point, if I'm not mistaken, there's a dip in the performance there). This could be your problem too, I guess.

Could this be? I'm not that technical so I'm just guessing. I hope to have another go shortly to test this "theory" out.

Scott, SNAP ! I have the exact same problem. About 6 weeks ago I went to France and tried to keep up with my boss on his Super Blackbird - both of us had a sh_itload of luggage too. I only managed 143mph

. I then tried again taking 5th gear to the limit. I got to 140mph easily then the power seemed to top off there so I changed to 6th and I got ....... 143mph. I tried another 3 times and got the same result. Needless to say my boss whizzed by laughing.

Any thoughts on what it could be ? I have a 2001 RSVR, Rene twin high mount Ti cans, Rene airkit thing and rene EPROM. I have a 16T front sprocket and 125RWHP.

out of interest, what revs is the bike pulling when its indicating 143mph?

You should have the wire cut if you have removed the exhaust and airbox restrictors, I have the same bike as you.

To find out the origin, just take off the riders seat and on the top left rail of the rear subframe is a white sticker like this: 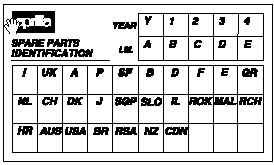 The stamped holes show the origin

For your speed I would say the following:
1. It needs 2000 miles at least to loosen her up
2. With 17/42 (standard) gearing it will pull 158mph in 5th, but you need to be on the limiter in 4th before changing. Forget 6th on 17/42, it will only keep its speed
3. You need to tuck a long way to get speed, and forget it with luggage (Mr Venjer, if you did 143mph with luggage don't worry, try it with only leathers on)
4. Fitting a 16T is the bet mod you can make and it will still pull 167mph (I've not tried this by the way) mine will pull over 155mph in about a mile from a 50mph ish start. Screeech and Singleman can both do this too. (officer, on closed roads obviously

Me Falco will do 258kph flat out with 15T sprocket and wont go any faster even downhill as the bikes almost on the rev limiter.

With my cavernous backpack on, the speed seems to be limited to about 240kph. At this speed the zip also flies open, emptying the contents of my bag onto the motorway. Which is nice.

So I agree with ya on this subject DMR

Me thinks the 16T front sprocket is better for lengthy high speed running.

Crmc33, I can't remember what revs I was at.

Its annoying because on my 2000 RSV I got 150mph and shyt myself, it was still accellerating. What a sick day that was. About 120 bikers from London went to the Luton carnival last summer. Most wearing casual clothes and trainers. I had a jeans suit and trainers. On the way back it was crayzeeee.

. 90mph stoppies, standing up wheelies whilst overtaking down the inside of cars. Complete lunacy. This is why I kacked my pants when I hit 150mph. The ringleader rode an R6, south london boy, he could ride. He seemed to win almost every contest he participated in.

Rich, I think a localish high speed trip is needed, a good top speed run without baggage. I wonder where ?.........

Well, i'm glad i don't seem to be the only one to experience this 'lack' of performance. Thanks for all the tips.

A guy sent me the following link of a German Mille specialist that sell a different air-intake kit for 2001/2 Milles. It looks just like my friends 2000 RSV-R version, which has done +165mph at the NW200.

i mention this because my 2001 RSV intakes, from the fairing, are round and approx 3 inches wide, but taper down by approx 50% into a triangular shape by the time they reach the main airbox.

I would be reluctant to try one of less restrictive kits without knowing a bit more about them and the affect they have on the bike. The website does explain that it should be used in conjuction with their kit EPROM, no great surprise there then.

The site "looks" interesting with some good stuff. My problem is, "I don't speak German!"

MR Venjer why 16T sprocket, I would fit back 17t, I am sure she will not run out of steam. Our test Falco has 17/41 and no one has complained

cut and paste any of the text into www.freetranslation.com
it comes out quite reasonably, there is the odd funny translation, but you get the idea certainly.
Rgd
Scott

. What is it with 143mph ???? Anyway, I thought bollux, I tried again and changed to 5th earlier. It pulled steadily from 140mph and kept going to 151 mph where I slowed down. It was much better than my previous runs. I am wondering if I am fully restricted. Why the big loss of speed ? Does the airkit have anything to do with it ??

Powermaster, the 16T gives me (more) thunderous bottom and mid range grunt. I ride in town so getting the extra power earlier serves me well - and makes me smile too

You have the airkit and Rene twin setup right? If so I guess you have the Rene eprom therefore nothing left with the std bike restrictors, so you are full power. I think your dyno's showed good too, so that should not be a problem. I use a 16T front sprocket and tried a bit of testing. In 6th gear at 30mph I can crack the throttle and it pulls reasonably well to 50mph, then like a mad thing from 50mph, all the way to 140mph where it slows a little until I ran out of road at 160mph (officer - on a private road ;o)). It was still going strong though. I previously thought I had to max it out in every gear to get good speed, but this proved me wrong.

Hi Guys
Just returned from the WSB round at Misano....covered 2540 miles in 5 days on the Mille

So I had the chance for some fast riding, well frankly it was all fast

but with a kitted up 15 stone rider and my Ventura luggage system (recommended) weighing in at about 20 lbs and behaving like a sail on the back I got 156 mph in 6th. I thought I could do better and tried running to 9500 rpm in 5th before changing up but didn't improve on that, hit 150 ish a few times but didn't get the chance of a luggage free run.

Lost some power on the way back when the rubber seal on the Micron got blown out.

We did some 6th gear roll on's on the motorway from about 80 mph, I was eaten by a ducati 996 with 50mm pipes and race cans and chipped. Next time I slipped the Mille into 5th and stood up against a new Speed Triple, the Duke and a GSXR1000, I came second behind the Gixxer so the moral is the Mille is overgeared for me anyway.