Hi all, new member of this forum, been an observer for a while, has anyone ridden a Touno, looking for something a bit more relaxed.

The history, Jap bikes from an early age LC's etc then became die hard Kawaski man 12 in 7 years, then in 1997 someone introduced me to a V twin (it began with D and ended with a 6) something was missing though a little bit of practicality. It is not a good reason for buying a moto6.5 but it is mine this was in addition to the 916, this new aprilia thing was so good I decided to buy another a Pegaso thing, (I had to keep moto as no one would buy it)another brilliant bike. Then aprilia decided to make a big twin and I had to have it RSV1000 multi, then the R was introduced I got it. then the R in yellow (still got the moto and 916. Then while out riding one day last October I fell and broke my neck, don't let this put you off bikes I was riding a horse and chasing some fox (a RAT with good PR) . The good news is all is well walking talking and look normal, the only problem is I have a mille R, a 916 and a moto6.5 in the garage and the only bike I am comfortable on for more than ten miles is the moto. I have tried the CapoNord, great bike high position good power and looks, but it just doesn't have the crispness I am looking for.The Falco, well no offence but I have just never liked it. My local dealer (great blokes) will put one on for me as a demo after march next year (their insurance prohibts them between Oct-Mar)but I would like to speak to anyone who has ridden one hard.

Hi V60, welcome to ARS, real sad to hear about the accident

real glad to hear that you did not give up on biking.
I too have the Mille (vin 0003) and the 916sp, I too tested the caponord and found it to be one of the best sitting position bikes, as for the Tuono, I don't think anyone managed to test one yet? BenW???

The Falco, well no offence but I have just never liked it. My local dealer (great blokes) will put one on for me as a demo after march next year...I would like to speak to anyone who has ridden one hard.

The Falco? 'Cos we all have, some harder than others, like racetrack hard.

If so, then you've come to the right site.

Welcome aboard in any case.

As I said no offence, just not my choice. I do know that there are many well set up falcos around, I just don't like the styling

The big problem for me is the swing arm, this part of the bike looks like it has been an overthought, compare it to the mille.

As I said no offence just my opinion, as a design engineer I like to appreciate form as well as function, that is why I have the moto6.5

I think I will go onto the Mille site and say that I dont like them as well. Im sure everyone will thank me for it.

I hope you are not suggesting that the 6.5 is
some kind of design masterpiece. Monsieur Starke should really stick to what he's good at - designing vases and urinals. The 6.5 is butt ugly

I know a couple of guys who've ridden the Tuono and they think it's a cracking bike. They reckon it's more practical than the RSV yet maybe a bit more fun in most situations too!

Hey there, Starks design is a excellent!
If I was a trendy Parisian on a date with a lovely "jeune fille" that bike would be my first choice (or a red Vespa maybe).
For a sports rider it's just style over substance, our biggest no-no...

I don't even think it has much to offer from an aesthetic! It's got to be one of the butt-ugliest bikes I've ever seen.

Lucky then, perhaps, that beauty is in the eye of the beholder...

Didnt Monsieur Starke design kettles before he moved onto bikes? The GT750 Suzuki may be a classic but its hardly pretty

Since the motto6.5 I think he also designed my TV remote control...no bull! Aprilia must've been mightily impressed!

Last time I heard Aprilia couldnt give the moto6.5 away! I found one in a kinder egg last week!

You have every right to say th 6.5 is ugly, as I have to say the falco is not my favoured design, howewver at the time it was a cheap second bike which proved to be an interesting ride and great talking point, as you have all proved.

If I pulled up on my 6.5 and you on your Falco I would get more attention.

As for taste and styling, my windmills are the most sought after in Europe,(within my clients, no one else counts

Bikers are a very conservative bunch taste wise.
They want their bike to look badass or like the latest GP machine or an easy rider according to their personal Walter Mitty dreams.
That's why we're left with one Tambourini in an ocean of generic designs.
A good designer can design anything, a toilet bowl or a bike...hu no I didn't say the 6.5 looks like a crapper!!! 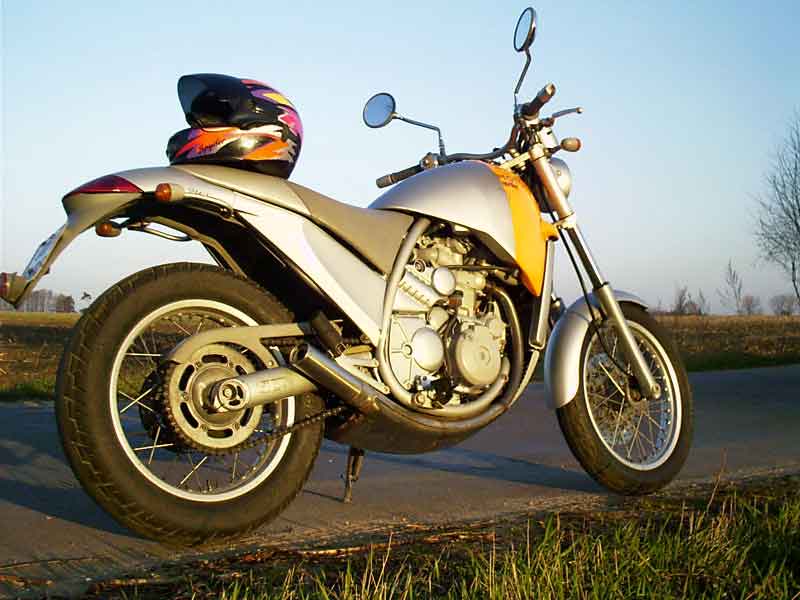 - If I pulled up on my 6.5 and you on your Falco I would get more attention.

- As for taste and styling, my windmills are the most sought after in Europe.....

- I was riding a horse and chasing some fox

Oooh, I nearly fell off my chair, helpless with giggling, it's just the way you tell 'em, it's a natural gift.... 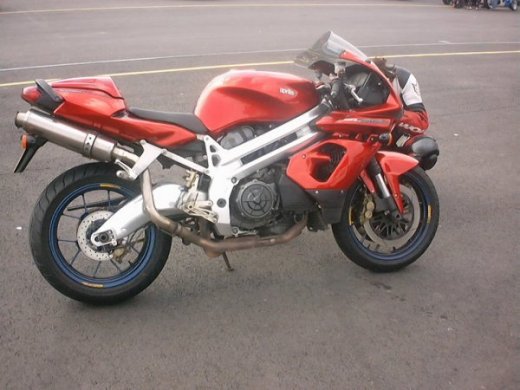 SWEEEEEETTT!! that's a "cafe racer" for you
I like it's looks even better than my "boy racer" Mille
If only prilia used the Mille's swingarm on the Falco they'd doubled their sales overnight, I'm sure of that.
Not the OZ wheels though, $$$ ouch!

Agree wholeheartedly about Aprilia and their choice of arms!!

Geo, I'll show you my Falco, when the polished mille arm and Ohlins front end go on shortly. The forks/triple clamps are off of an RSV-R (bargain price), plus I've got bars like Scottaride's being milled as we speak from 50mm to 51mm.

I was going to do the swingarm next weekend but my dealer who was going to lend me the swingarm extraction tool, just went into receivership today. Total bummer. So I'll now have to look around for a dealer to do the arm. The front end will be easy enough though.

I sent that pix to a Belgian friend who wrecked his Firestorm (superhawk) and is undecided on what to replace it with.
I've been lobbying for the Falco, he's also considering the new SV1000 since he can wait until spring.
Let's see if that pix does the trick!

here is a pic of what it looks like at the moment with Rene Ti low mounts, polished Rims, Brembo Full Floating Rotors, and Ohlins rear shock just to wet your apetite. 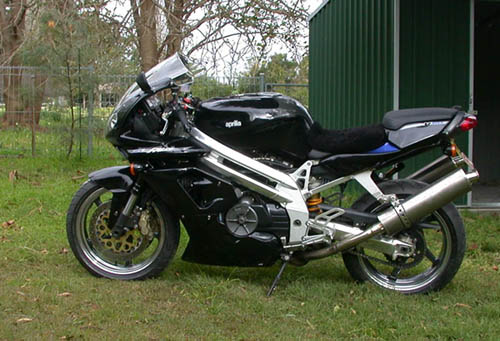 my dealer who was going to lend me the swingarm extraction tool,

The weird nut remover, or should I just use it on your nuts!

Wont a soft alloy drift to the job? I think thats wot I used on my RGV supermono chassis.

look at the swing arm, on the opposite side to the bolt theres a 'threaded bush' with the 'cross' at the end for the tool. When the new swingarm's goes in, this bush needs tightened till it matches up against the outside shell of the adjacent bearing, thus keeping them in line laterally. I believe there's a tourque setting but no idea what. My mecco didn't seem put off when he realised he'd gorgotten the tool, but had forgotten the socket for the bolt itself, so we couldn't even get the arm off! End result both spanner and tool were retrieved the next day...

Ex, if you can find out the tourque setting you should be able to tackle it yourself, if you want I'll phone Steve and get details...

What I did was use a soft drift inserted into the swingarm bush castellations and knocked it loose with a hammer. Tightening was just the reverse of the procedure. Who needs torque wrenches eh?

...They're usually way off anyway and depend on the condition of thread etc anyway (they are handy for tightening cylinder heads etc down evenly tho). As long as its not overtight and theres no play in the arm once fitted then I'm happy.
As I said this was all on a RGV banana arm not the mille one but the design is the same.