how about a nice piccy of an RS3 with its underwear off to brighten up another boring day at work.... 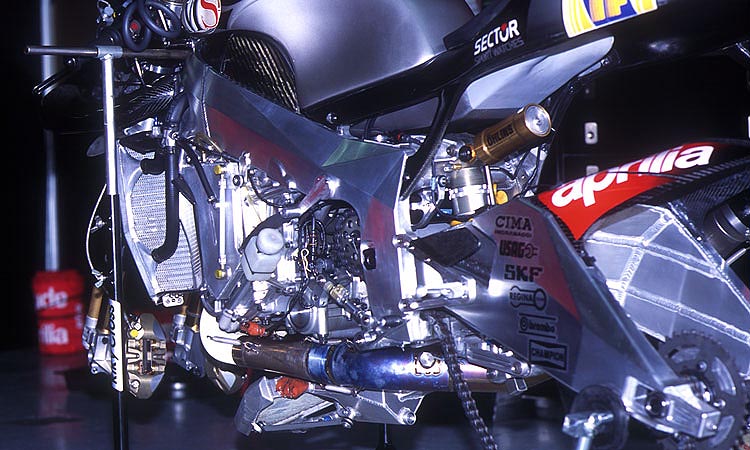 Almost as nice as a Falco

How amazing is that swing arm?!!!

I went up to the GP practice at Donnington yesterday. The RS3 sounds amazing! Much lower in tone than it seems on the TV. There is a boom each time it changes gear too!

Gary McCoy was sliding the rear out of the Melbourne loop - awesome to see!

Rossi was steaming along - pole position.

Biaggi fell off in front of us; on the power out of the loop, he slightly highsided it and was being dragged along beside it before he let go.

The fourstrokes sound pretty shite on part throttle, popping and banging all over the shop. The Suzuki V4s seemed the worst for it. The M1s were pretty awful too. Rossi's V5 sounded pretty sweet though. The two-strokes definately sounded the best for carburation though, clean everywhere in the rev range.

Should be a good race today!

Got to agree with Ben, the RS3 sounds the best, the Suzuki is pants, but the M1 sounds awesome I was lucky enough to get up close to the M1, I even held the exhaust (full system) in my hand, its as light as a feather, its made by Termi I tried to convince them I could adapt it to fit on my bike but they would not have it.

At the end of the day there was a carboard box in the back of the trucks with all the damaged parts from the weekend, approx £50000

Again, got to agree on the sound of the RS3. Popping and banging like an F1 car on the down shifts. Awesome...

The M1 did sound good too though, quite distinctive. The V5 wasn't as loud as I expected, just a deep rumble.

how do you know what a didgeridoo sounds like in a cave! You're not aboriginal or australian!

Still wouldnt say no to one if it were available for less than a 'pony'.

I love the frame too Ad, all nice and angular. It looks 'quality'.

They need to ditch the pneumatic valves though eh? What's the point if you aren't reving that high anyway?!

I know I wouldnt fancy trying to hold onto the conrod at that speed!

(even if I was small enough to fit in the cylinder)

They need to ditch the pneumatic valves though eh? What's the point if you aren't reving that high anyway?!

You can also get extra valve lift with pneumatics.

the problem isnt that the engine isnt making enough power. IMHO its more to do with it wieghs more like a whale than a racing bike and its got dithering rider!
Aprilia should bring Doohan out of retirement to ride it!

On the subject of the revs, it probable doesnt sound like its revving that high cos the engine is designed to rev high and hence revs very smoooothly. Just my Murray Walker Style Hypothethethis

I meant from what I've read about it cmrc, 15k revs or something like that.