The first time that a 500 Grand Prix machine recorded a 200 mile per hour trap speed was in qualifying for the German Grand Prix at Hockenheim in June of 1994 when Shinichi Itoh turned just over 200 miles per hour on the longest of the two back straights on the fuel injected version of the NSR 500.

Although the 500s have gotten slightly faster since then, Hockenheim no longer hosts a GP and no other track offered a long enough straight to allow the latest 500s to stretch their legs. It seemed that the 200 mile per hours barrier, given the limits of the existing GP tracks, was almost impenetrable , but at a press conference today in Mugello, Aprilia proudly announced that Regis Laconi had taken the new MotoGP class three-cylinder 990 cc RS3 down the Mugello home straight at 330 km/h, over 205 miles per hour, and 10 km/h under the best trap speed ever recorded there by a motorcycle.

The Mugello circuit in the rolling hills of Tuscany near Florence in North-eastern Italy, is owned by the Ferrari factory and is used year-round by Aprilia to test their Grand Prix motorcycles.

The Aprilia RS3 is features an across-the-frame triple with pneumatic valve closing, two cams and four valves per cylinder. The machine, designed in conjunction with Cosworth has a �fly-by-wire� electronic throttle (no cable) and, in addition to making a lovely noise, is now producing �over 220 horse power.�

�The lap times are still not quick enough, but we are improving all the time with frame and suspension set up and Dunlop is working with us to find the right compounds,� said rider Regis Laconi, who surprised the Italian press by announcing, in broken Italian that he is no longer French. He has been granted Italian citizenship.

Two years ago when Laconi was dropped by the Red Bull Yamaha team and replaced by Japan�s Nori Haga, he bitterly told journalists, �I have the wrong passport. In this paddock you have to be Spanish or Italian or Japanese. I will become Spanish if that is what it takes,� he said.

One of several Spanish journalists present said, �You don�t have a very Spanish name, Regis.�

Regis� reply was much funnier than he intended. �Then I will change my name to Lacoño."

The Spanish and Italian journalists roared with laughter and Regis thought he had made a wonderful joke, but only learned later that his hastily invented transformation of his last time had included a rather vulgar Spanish word for the female reproductive organ.

His change to Italian nationality has not been accompanied by an alteration to his last name.

Laconi, 26 from Saint Dizier in France, rode for Aprilia last year in World Superbike and earned his MotoGP ride on the new prototype four stroke by winning the final race of the season and the Aprilia Superbike V-twin.As a GP rider he won the 1999 Valencian GP for the Red Bull Yamaha team and backed that up with a third place in Australia, his only two GP podium appearances.

While we are on the subject of nationality changes: France may have lost one rider but gained another over the weekend when Andorra´s Eric Bataille, who rode in the 125 class last year, switched to a French passport and celebrated the change by winning the opening round of the French 250 Championship on a Honda RS 250, prepared by American George Vucmanovich. Bataille is the test rider for the Spanish-based Cibertel Honda BQR team which enters British riders Jay Vincent and Leon Haslam in the FIM 250 World Championship. 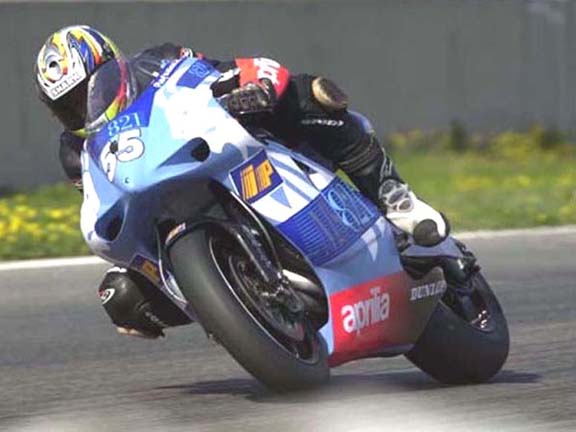 Anyone with a name like that is a hero in my book.

Rossi broke the 200 mph barrier as well, as did some others. But the Cube was second fastest down the straight!

Bring on the Friday practice at Suzuka in 4 days time, so I can sleep again at night.

Good old Dennis Noyes. What an anorak he is, and I mean in a good way.